The Kogi State House of Assembly ordered the closure of the company after its investigation into the Cement factory’s operation allegedly revealed that no valid acquisition took place for the company. 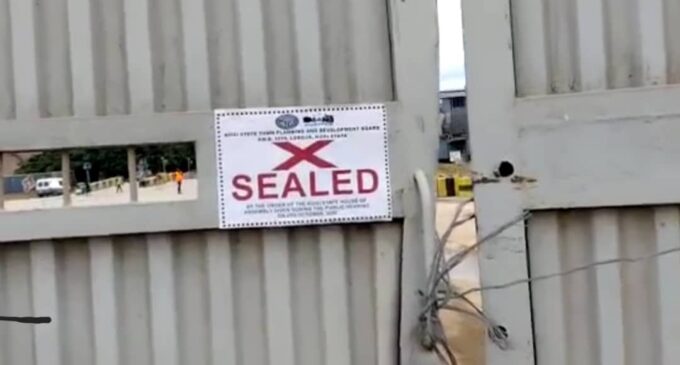 The Dangote Cement Factory, Obajana, has been sealed by the Kogi State government.

The factor was sealed yesterday following agitation by Kogi indigenes on the questionable circumstances surrounding the acquisition of the company.

The Kogi State House of Assembly ordered the closure of the company after its investigation into the Cement factory’s operation allegedly revealed that no valid acquisition took place for the company.

But, the management of Dangote Cement said that no fewer than seven of its staff were shot and several others injured by the over 500 armed members of the state’s security outfit, the Vigilantes, that stormed the cement factory at the instance of the state Governor, Yahaya Bello.

Jubilant youths, who had trooped to the company on hearing the news of the closure, chased workers away but were stopped by Kogi officials, who promptly waded in to avoid damage.

The youths claimed that the Company had neglected the community they are making billions from, even though residents are dying from illness as a result of pollution.

The state House of Assembly alleged that Dangote, upon invitation by the Assembly, requested more time but did not appear at the House to show any evidence to the contrary.

The Commissioner for Information in the state, Kingsley Fanwo, while responding to journalists’ questions, said, ” Pursuant to the Constitutional authorities of the Kogi State House of Assembly, and upon petition by the people of Kogi State, an investigation was carried out on the acquisition of Obajana Cement Company by Dangote Company.

“It was found that no valid acquisition took place, as Dangote could not show evidence of what was paid as consideration for the acquisition.

“The Legislators invited the Chairman of the Company, Aliko Dangote, before the house for explanations but he failed to appear before the state Assembly, giving excuses.

The House of Assembly, therefore, ordered the closure of the company pending when they can present it with credible evidence of a valid acquisition.”

The Director-General, Lands, Kogi State, Nasir Ochi, who was also on the ground, added, “In this regard, the security agencies were directed to give effect to the resolution.

The Kogi State House of Assembly had earlier resolved to shut down Dangote Cement Company situated at Obajana pending its submission of relevant documents that back up its operations and ownership structure, especially the transition from Kogi Cements to Dangote Cements.

The House considered inviting former Governor Ibrahim Idris to shed light on the considerations given to the State during the signing of an agreement between the company and the State.

These considerations include the ten per cent shares of the State in the company, the company’s social responsibilities to the State and other benefits.

These were part of the House resolutions on Tuesday after considering the ad-hoc committee’s interim report by Hon Isah Tenimu.

The House also directed the Commissioner of Police, the State Commandant of Civil Defence Corps, and the Head of Vigilante Group in the State to ensure the resolution was enforced.

Reacting to this development, Dangote Cement, in a statement stated: “Members of the mining and host communities have condemned the Kogi State Government for what they described as the extra-judicial and unlawful deployment of the Vigilantes to cause chaos in the Obajana community.

The vigilante group members were wielding arms of different kinds including local and assorted rifles as residents and passersby scampered for safety.

As at the time of this report seven staff of the cement company were being attended to at the hospitals over the gunshot wounds inflicted on them.

Mr David Oluruntoba, spokesman for the Oyo Mining host community described the act as primitive and disgraceful, saying the youths of the community can never be used, and will not take part in such ‘evil practices.

He said: “They called us to join them. But I told them that the company has not offended us. We just signed a Community Development Agreement (CDA) and the company has been helping us and providing us with jobs. What has the government done for us, nothing? There is no basis to support the government.”

Speaking in the same vein, the spokesman for Iwaa mining community, Rotimi Kekereowo said: “We would never support the government on this matter. What have they done for us? We don’t have a single political appointment at the State level. Even when we have problems with electricity and flooding, it was Dangote that was helping us. So, I want to repeat it. We will never support them.”

Speaking also, the Olu of Akpata, Fredrick Balogun said he was never contacted and as such cannot justify the unwarranted invasion.

“We are royal fathers, and we will continue to seek the path of reconciliation and amicable resolution of any misunderstanding. We don’t have issues with the company,” he charged.

Mathew Ojonuga, a resident said important issue like flooding in the state which has rendered many homeless has not been attended to only to be chasing private companies that have been providing us with means of livelihood.