Kudirat was alleged to have directed the prospective tenants to Nojeemdeen for payments after they enquired about the building. 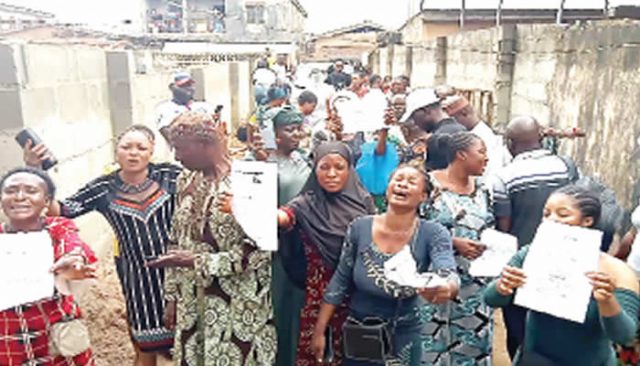 It was pure pandemonium that took place on 22, Anuoluwapo Street, in the Ejigbo area of Lagos State, on Saturday, according to The PUNCH.

Pandemonium took place at the area after about 200 house seekers who paid various sums of money for accommodation discovered that they had been duped.

PUNCH Metro reports that the landlady of the one-storey building, identified only as Kudirat, allegedly connived with an agent, Tunde Nojeemdeen, to perpetrate the fraud.

Kudirat was alleged to have directed the prospective tenants to Nojeemdeen for payments after they enquired about the building.

Things took another turn on Saturday, September 24, when the victims got to the house and discovered that the number of tenants outnumbered the 14 available flats.

One of the victims, Oluwakemi Sodiq, said the prospective tenants paid sums ranging from N300,000 to N500,000.

She said, “On September 24, I was at my brother’s wedding when they told me that there was commotion at the house. On getting here, many had been injured; the police even came and arrested some people. All we want is justice; we need our money back. We can no longer hold the pain. As I speak to you, the wife of one of us just gave birth but he has nowhere to put both mother and child. They are currently staying at their pastor’s house. This is our reality. We are homeless.”

Sodiq stated that the matter had been reported at the Ejigbo Police Station and was later transferred to the State Criminal Investigation Department, Yaba.

The married woman alleged that the SCID officers demanded N50,000 from each of the victims.

She said, “When we made the report, Nojeemdeen was arrested. We later went to the SCID, but the IPO told us to pay N50,000 each to write our statements. We refused to pay the money and went to a Deputy Commissioner of Police, Lanre Bankole; he pitied us and took us to the Assistant Commissioner of Police at the SCID, who instructed the officers not to collect money from us.

“The ACP told us that he was not aware of the matter. Till now, we have not heard anything; all the agents working for the developer are nowhere to be found and have all switched off their phones.”

Another victim, who identified himself as Prophet E. Sunday, stated that they later found out that Nojeemdeen had defrauded many others in the past.

He alleged that the SCID was covering up for him.

The cleric said, “When we found out we had been defrauded, I called the developer but I could not reach him. I came to the building and found out that a fight had broken out between the tenants. I eventually made enquiries and discovered that this has become a business for the developer; he is fond of defrauding people. He has another house on this same street that he is developing; the people there are also complaining of being defrauded.

“I got to know that when something like this happens, he’ll just rush to the SCID and pay off the police and that is how the case will die down. This is a profession for him and the police keep covering up for him. In fact for this case, he wasn’t arrested; he surrendered himself to the police because he knows that once he gets to the station, all he has to do is pay the officers.

“Please, we need the Lagos State Government to come to our aid. As I am talking to you, I am homeless; we are all homeless, the previous places where we stayed, we have been thrown out by our landlords.”

Some of the victims showed our correspondent receipts confirming payments into Nojeemdeen’s Sterling Bank account.

Our correspondent also observed many of the victims lamenting that they had been thrown out of their former houses.

“He is currently in custody,” he added.

House frauds are rampant in Lagos, where there is accommodation deficit.

In June 2022, two developers, Oluwasegun Adewara and one Okeowo, were arrested by the police for allegedly defrauding no fewer than 70 prospective tenants in the Surulere area of Lagos.

Speaking on the incident, a building expert, Babatunde Ajibola, stated that it was important for house seekers to do due diligence before paying for any house.

He said, “One reason people fall victim to this is desperation. There’s a lot of due diligence that should go into house seeking. They should ask questions like what is the reputation of the developer, has he done something before, did he deliver on what was promised? These are the questions that can help someone make informed decisions on whether they want to go ahead or not.”

The Lagos State Commissioner for Information and Strategy, Gbenga Omotosho, advised house seekers to use the right channels when looking for accommodation.

He said, “These developers are supposed to be registered so that one can check their names and see if they’re genuine; you don’t just hand over money to any developer.

“The state ministry of housing has a branch that handles such matters, where property can be enquired about, so no one becomes a victim. Before anyone does anything regarding any property, they should involve a lawyer. What this developer has done is criminal and I believe the police are on the matter.”