The man, who described the #LekkiShooting incident as “photoshopped” and “cropped” has stated the reasons behind his claim in 2020. 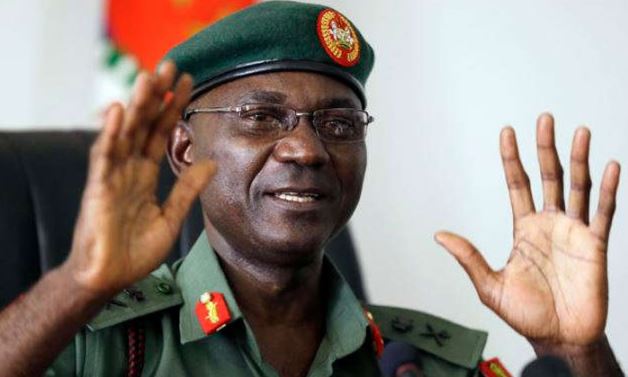 Ex-Nigerian military general, Major General John Enenche (retd.), has released a statement to address the outrage against him.

The man, who described the #LekkiShooting incident as “photoshopped” and “cropped” has stated the reasons behind his claim in 2020.

The ex-General who made the list of the 1,234 members of the presidential campaign council of the Labour Party presidential candidate, Peter Obi, had come under fire on social media for his stance on the #LekkiShooting, which led Obi to declare that the LP would review the campaign council list and issue an updated list in due course.

On Friday night, however, Enenche released a press statement on his official Twitter page, @EnenchejohnEne1, addressing the issue raised. He said he only declared that the massacre was photoshopped because of an oath of allegiance he swore on commission into military service.

He said, “Dear country men and women, following my appointment on the campaign council of Labour Party, there were reactions on the social media about my pronouncement concerning a video shot at the scene of #EndSARS incident at Lekki toll-gate on October 20, 2020. Everyone that commented in anyway was right based on the information at their disposal and individual analysis.

“Personally and professionally, I worked with the overriding interest of Nigerians at heart based on the oath of allegiance I swore on commission into the military service, which is sacrosanct.

“I sincerely shared in the pains of that breaking news through the social media as it were. On that note, I want to assure all that more efforts will be put in, so that all assertions can be cleared convincingly from appropriate sources. God bless our cause for the recovery of our dear country Nigeria.”

The PUNCH had earlier reported the reactions and criticisms that trailed his inclusion on Obi’s campaign team.

Enenche further stated that his cause for electing credible leaders come 2023 spurred him to declare his support openly for the LP candidate without fear, adding that he was sure that Obi and running-mate, Dr. Yusuf Datti-Ahmed, would provide quality leadership.

He said, “Recall I underscored the need for every conscience bound Nigerian, cutting across societal class to join in the current political exercise in the country towards electing credible, competent and capable leaders in 2023.

“In addition, I enjoined all to speak out and not to sit on the fence.

“Consequently, I made bold to openly and objectively support the candidature of HE Mr. Peter Obi and Dr. Yusuf Datti-Ahmed, without fear or contradiction. All based on my knowledge of the duo for about 17 years and 5 years respectively, that they can provide quality leadership for the Nation that will guarantee effective followership.

“This is what Nigeria needs now to overcome all the numerous challenges imposed on the citizenry in the last two decades,” he added.

Reacting to the press statement, a tweep @anthonyabakporo said, “Dear OBIdients, this man was under authority then. If we forgive him, soon we shall know who gave that order. Please forgive him, I admire his humility to do this press release.”

Another tweep, @Mmadudili said, “Here is Gen. John Enenche (retd.), condemning bad leadership as a result of insecurity in Nigeria. He equally went on to endorse @PeterObi saying he is the only one that has shown the capacity and readiness to lead the country aright. Enough of the whole blackmail on him.”

Some tweeps however are of a different opinion. @fisayosoyombo reacting to the release said, “They said Maj-Gen John Enenche only claimed evidence of Lekki massacre were ‘photoshopped’ because he was in the Army at the time.

“Enenche is now retired, but his statement here in the aftermath of the outcry against his inclusion on Peter Obi’s campaign team remains vague,” he added.