Shock As 19-Year-Old Boy Kidnaps Himself, Collects N1 Million From His Father


He was arrested for organising his own abduction and collecting N1 million from his father as ransom. 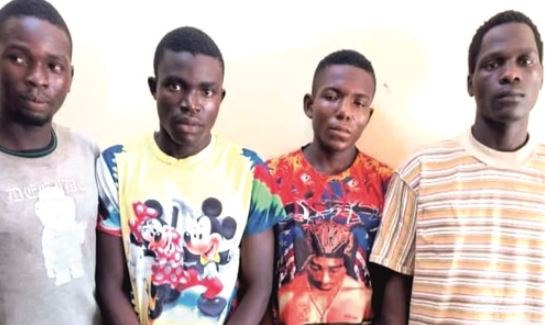 A young Nigerian boy who is just 19 years old, has been arrested by the police in Adamawa State.

He was arrested for organising his own abduction and collecting N1 million from his father as ransom.

The suspect, Israel Emmanuel, allegedly got three of his friends together to perfect his faked abduction, keeping him out of sight and communicating with his father to collect the ransom.

The Adamawa State Police Command confirmed the arrest of Israel who was said to have confessed to the self-kidnapping drama with two other accomplices, Fartaci Mustapha and Zakka Nuhu, both from Mubi North Local Government Area.

A third accomplice, Abdullhamid Mohammed, was still on the run from both his friends and the police at the time of filing this report.

Israel, who hails from Mararaba Mubi, allegedly met Zakka Nuhu at the Welcome to Mubi area of Mubi town and left for Muvir in Mubi North LGA to hide himself in Fartaci’s house for six days while they negotiated ransom with Israel’s father.

Fartaci was said to have made the telephone calls to Israel’s father, Emmanuel, telling him about the ‘abduction’ of his son.

After Fartaci introduced himself to Emmanuel as one of the kidnappers, he handed over the phone to Israel and they communicated.

Israel told the father that he had been abducted and ransom was required to get him out.

After six days in Muvir, Israel returned to Mubi and regrouped with his other accomplices to mount pressure on his father until the father agreed to pay N1 million.

He detailed Fartaci and Abdulhamid to go to the bush in Mararaba Mubi to collect the ransom.

The two met with Emmanuel, but it was Abdulhamid who took the money where it was kept for them.

To the dismay of the rest in the kidnapping plot, Abdulhamid declared N500,000 only as the amount the father paid as ransom for Israel’s release.

Israel returned home with N200,000 as his share of the N500,000 loot while Abdulhamid, who knew how he had betrayed his friends by keeping half of the loot to himself, promptly dropped out of sight, long before the police got into the matter.

The other suspects were arrested following a complaint made to the Adamawa State Police Command by Israel’s father, Emmanuel, who at the time did not know that it was his son who abducted himself.

The Police Public Relations Officer in Adamawa State, Suleimam Nguroje, a Superintendent of Police, confirmed the arrest, assuring that the suspects would be charged to court.