Emefiele said this on Wednesday in Abuja, at the 28th edition of the apex bank’s annual In-house Executive Seminar with the theme, ‘Digitalisation of Money and Monetary Policy in Nigeria’. 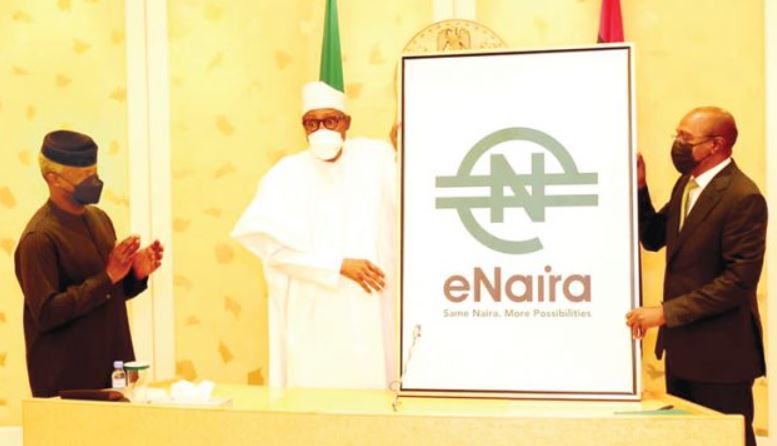 Godwin Emefiele, the Governor of the Central Bank of Nigeria, has made a revelation about the eNaira.

Emefiele said this on Wednesday in Abuja, at the 28th edition of the apex bank’s annual In-house Executive Seminar with the theme, ‘Digitalisation of Money and Monetary Policy in Nigeria’.

He was represented by the Deputy Governor, Financial System Stability, CBN, Aisha Ahmad.

The News Agency of Nigeria reports that the eNaira, CBN’s version of the Central Bank Digital Currency, was inaugurated by the President, Major General Muhammadu Buhari (retd.), on Oct. 25, 2021.

According to Emefiele, the eNaira was developed to broaden the payment possibilities of Nigerians, foster digital financial inclusion, with potential for fast-tracking intergovernmental and social transfers, capital flow and remittances.

He said the eNaira had been globally acclaimed as a success story.

“Since its launch, a total of N8 billion, consisting of over 700,000 transactions has passed through the eNaira platform.

“As part of the CBN’s effort to further integrate and broaden the usage of the eNaira, it was assigned an Unstructured Supplementary Service Data (USSD) code, enabling payments by simply dialling *997# on a mobile phone.

“I am proud to announce to you today that the eNaira has been attracting accolades across the globe as a monumental success.

“It topped the charts on retail CBDCs projects globally, as at April (PwC, 2022) and several central banks across the globe have been requesting our success template on the eNaira,” he said.

He said the story of the eNaira had been one of courage, persistence and commitment to explore new frontiers and possibilities.

He added that, as part of the digitisation drive, the apex bank had taken transformational steps in entrenching a culture of “big data” and data analytics, as tools for effective policy making.

“To this end, the CBN Data Architecture Project (CeDAP), code-named ‘Project OXYGEN’ was commissioned, with the objectives of providing a repository of a variety of data from different sources,” he said.

The CBN governor said considerable gains had been achieved on boosting financial inclusion in Nigeria.

He added that at 64.0 per cent, the inclusion rate slowed down the digital transformation wheel, as all citizens must be carried along to optimise the gains of a digital economy.

“While cash-based transactions have declined significantly in the last decade, it is still the dominant means of payment, amidst a large informal sector.

“Nigeria boasts of one of the fastest growing FinTech ecosystems in Africa, with the industry projected to grow by 12 per cent annually.

“But the technological space is still maturing, with limited market size, funding and venture capitalists, access to baseline technologies, and skills, as common features, ” he said.

Obiora said that the intention was to proffer policy options for the consideration of management of the CBN.

“Through the past years, the seminar has lived up to its expectations by providing significant inputs towards improving management’s decisions.

“Our gathering here today should be seen as an important avenue to critically search for fresh solutions to emerging monetary and financial challenges confronting us today,” he said.

According to him, the digitisation of money enhances the powers of the CBN to impact its monetary policy.

He added that it also had the potential to change traditional structures of the banking and financial systems, while sustaining the primary mandate of the CBN.

“The gains in the digitalisation of money spans across enhancing tax collection, social welfare transfers, and more importantly, provide benefits that would enhance the goal of cashless policy in Nigeria.

“Similarly, the digitalisation of money is very important for the facilitation of remittances, financial inclusion, financial market deepening and ultimately, economic growth,” he said.

He said that the eNaira platform had so far recorded 927,000 total downloads; 317,560 activated consumer wallets with 33 banks fully integrated and live on the platform.

“Over 700,000 transactions amounting to about N8 billion has been recorded on the platform; and there are over 2.5 million daily visits to the eNaira website, ” he said.

The Federal Capital Territory Minister, Alhaji Muhammad Bello, in his goodwill message, commended the CBN for the initiative to bring together experts and key stakeholders to discuss topical policy issues aimed at improving the Nigerian economy.

In an address delivered by Secretary, Economic Planning and Research Department, FCTA, Mr Agboola Dabiri, Bello also commended the CBN for being proactive in its timely introduction of the eNaira.

“The eNaira is now acclaimed as the first CBDC in Africa and one of the first retail CBDCs deployed in the world.

“On the fiscal front, maximising the potential of digital currencies could be a panacea to the subsisting revenue challenge of government.

“It could be a tool for optimising tax revenue collection and improving public expenditure management in Nigeria,” he said.