He had sent a WhatsApp message to someone, stating that something was being sprayed in the bus he boarded and that passengers were feeling dizzy. 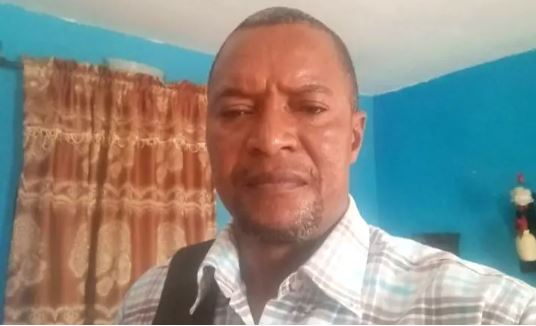 Gbenga Maxwell Ajayi, a 40-year-old man has gone missing while on his way to Murtala Muhammed International Airport, last Friday, to board a London-bound flight, Vanguard reports.

He had sent a WhatsApp message to someone, stating that something was being sprayed in the bus he boarded and that passengers were feeling dizzy.

According to information provided Vanguard, he was supposed to travel to London with Ethiopian Airlines whose departure time was by 1:40pm on Friday and to arrive in London, 6:35pm on Saturday.

However, he was later declared missing after the person that was supposed to receive him in London said he was not onboard.

The information in a WhatsApp chat also showed that at 9:44am, when he was leaving the house, he chatted with his agent who booked the flight ticket for him and told him he had ordered cab to take him to the airport.

By 10:31am, Mr. Gbenga sent a WhatsApp message back to his agent informing him that they were spraying perfume in the Oshodi-bound bus he took, making everyone dizzy. 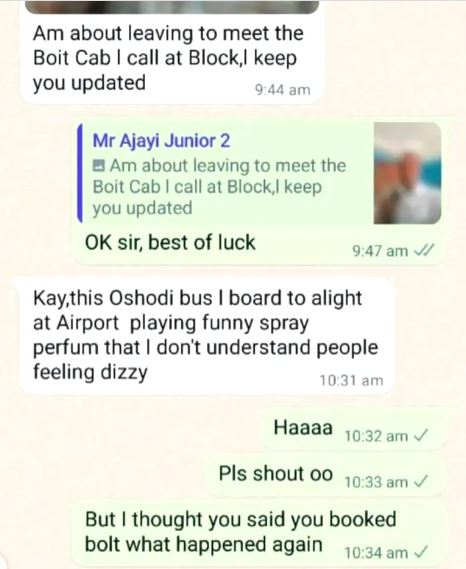 His elder brother, who gave his name as Seyi Ajayi, disclosed to Vanguard in a chat that his brother, Gbenga Maxwell Ajayi, was supposed to land in London on Saturday 12.

“He informed us about his UK visa. He needed our help to travel. My senior brother bought the ticket for him; Ethiopian airlines. Which will depart Nigeria at 1:40pm on Friday and get to London Saturday 06:35pm.

“I chatted with him on Friday because I wanted to send money to him. Then he acknowledge the money and he said he had seen it and was on his way to the airport.

“It was this morning my elder brother asked if I heard anything from him. Because the person that was supposed to pick him up in the UK did not hear from him.

“I contacted Ethiopian Airlines. They told me the flight landed but the ticket was not used. That means not onboard.

“So I contacted the guy that booked the ticket. It was then he gave me my brother chat with him and that is the situation.

“He told us about his plans. Showed us the visa and sought our support to facilitate it. That was when we decided to get him the ticket and give him money.

“As of 10/11am on Friday, I sent money to him, which he acknowledged and he said he was on the way after he received the alert.

“I sent a word of prayer to him and also warned him to be watchful.”

According to Seyi, the incident has been reported to the Ijaiye Police Station on Saturday night, but he and the wife of the missing Gbenga were told to report back on Monday.

According to his elder brother, Seyi Ajayi, “the traveling agent is well known to the family and I can only give his name when he allows me.”