In the trending clip, the lady, who claims to be the boyfriend’s main lover, accused the alleged side chic of snatching her man while punching and kicking her. 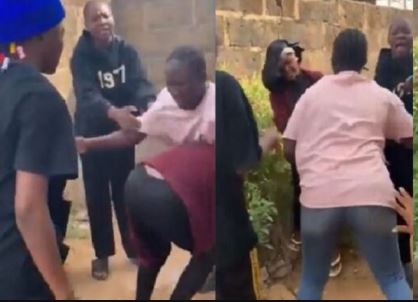 A really disturbing video has emerged online showing the moment a lady and her friends assaulted her boyfriend’s side chic.

The video has since sparked outrage online.

In the trending clip, the lady, who claims to be the boyfriend’s main lover, accused the alleged side chic of snatching her man while punching and kicking her.

At a point in the video, her friends joined her in dealing with the side chic, and together they overpowered her, pushed her to a bush, and mercilessly beat her.

One of the lady’s friends, who was there to attack the side chic, recorded the assault.

Girl and her friends assaults her boyfriend's "sidechick" pic.twitter.com/wopXZEYWZQ

Netizens were outraged by the clip and criticized the lady for plotting an attack on another lady for a man who hasn’t married her yet.

@FemiRebirth wrote, “Boyfriends dey get side chick??? Side chick ni everybody until you say “I do”…”

@Loadedbrodah, “They jumped her because of boyfriend, why don’t you Use that energy to keep your boyfriend? What if he lied to her?”

@Peculiar_Joyce1, “She is wrong. Why not take it out on your man ? And she has stupid friends. If they can’t tell her the truth and they also helped in beating the assistant girlfriend. O wrong na”.

@epaphras_ola, “They never marry you, you dey call person side chick”.