Ayuba Wabba, President of NLC, said this at the opening ceremony of the 18th edition of NLC Harmattan School, on Monday in Ilorin, Kwara State. 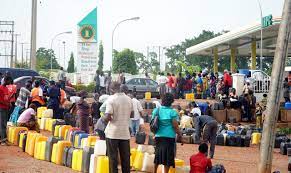 The Nigeria Labour Congress (NLC) has said it will not accept any increase in price of petrol.
Ayuba Wabba, President of NLC, said this at the opening ceremony of the 18th edition of NLC Harmattan School, on Sunday in Ilorin, Kwara State.
The theme of this year’s Harmattan School is “Expanding Nigeria’s Democratic Space for Trade Unions Organising in the World of Work.”
According to Wabba, “we will resist any price increase in the name of removal of subsidy. Let us look at the issue of subsidy.
“Subsidy is inefficiency, our inefficiency or inability to refine products. That is what we call subsidy.
“We said, we will not discuss anything subsidy. What they have told us is that the refineries will be fixed by 2023 and it will start production.
“So, once we start production, we can now come to the table and discuss the issue of subsidy. I think that is how to start the conversation and we are taking this issue very serious.
“Although there is nothing bad about subsidy, but in our case, it is shrouded in secrecy. It is not a transparent process, the consumption and all details are shrouded. This is typical of a capitalist economy.’’
Wabba said although there was nothing bad about petrol subsidy, but in Nigeria’s case, it had been shrouded in secrecy and lack of transparency.
He stressed that the consumption of petrol and all details about were still shrouded in secrecy, which according to him was typical of a capitalist economy.
He noted that in a socialist economy, the focus is how to make the people happy and stress is removed from the people.
Giving example of the deregulation of diesel supply in the country, Wabba said the cost of diesel has gone up astronomically since the policy was implemented.
“Is same example you want to set? All Nigerians should reflect on it. What they call subsidy removal is just increasing the price which has happened in the case of subsidy on kerosene and diesel. We have removed the subsequent subsidy on diesel and kerosene.
How much is diesel today, it is almost N850 to N860, per liter.
“Is that the same thing we want to apply to petrol? How many people can afford it? These are the very important questions that we need to interrogate. And this is what Labour has been interrogating.
“So, we are not running away from and we have never run away or shy away from discussing the issue of subsidy. Whether there is or not, we can discuss it,” he said.
Wabba said the NLC was aware that part of the reason for current fuel scarcity was the challenge of high cost of diesel affecting owners of petrol tankers used to transport petrol.
“But the bottom line is that we will resist any price increase in the name of removal of subsidy. Let us look at the issue of subsidy. What do we say is the issue of subsidy? Does it only mean price increase?
“Diesel adulteration is still there. Adulteration is more now in the case of diesel which has been fully deregulated, and the prices are not in the reach of anybody,” he said.
Top Stories