It is unclear what the man said to him which led to the wild confrontation. 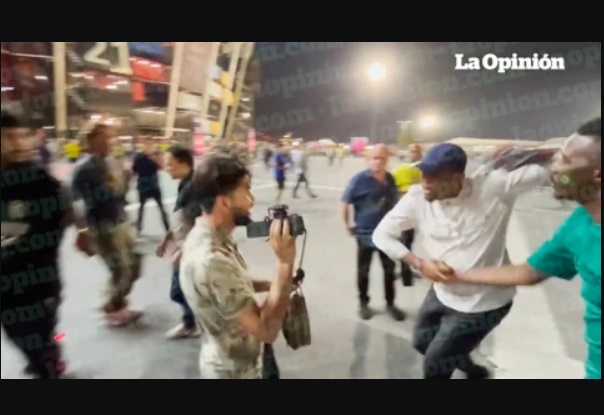 Cameroon FA president and ex-footballer, Samuel Eto'o has been seen in a trending video attacking a man.
The incident happened outside a stadium at the World Cup in Qatar.
The viral video filmed by La Opinion shows the former Barcelona, Inter Milan, and Chelsea striker leaving Stadium 974 in Doha, after watching Brazil's 4-1 victory against South Korea in their round-of-16 match on Monday night, December .
At first, Eto'o was seen posing for photos with fans as he made his way out of the venue before a man with a video camera approaches him and they began to exchange words.
Before the video cuts to a few seconds later, Eto'o was seen returning to the scene to confront the man. At this point, onlookers rushed in to calm the situation, but Eto'o refused to be held back as he continues to try and confront him.
While four men were holding Eto'o back, he gave his phone to a man, before breaking out to knee the man in the face, knocking him to the ground.
It is unclear what the man said to him which led to the wild confrontation.
Watch video below: