Responding via a statement, Olawale Rasheed, the spokesperson of Governor Ademola Adeleke condemned Omipidan for attempting to shift blame on the DSS and the police. 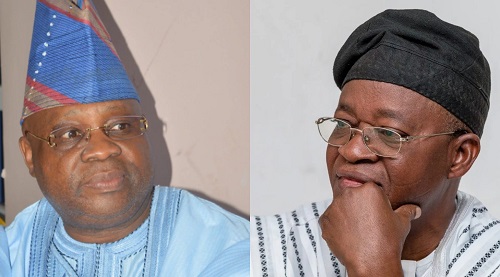 Former Osun State Governor, Adegboyega Oyetola has reacted to allegations of looting the government house.
Reacting through his media aide, Ismail Omipidan, the immediate past governor said the looting of Government House, Osogbo was allegedly perpetrated by men loyal to the State governor, Ademola Adeleke.
Omipidan made this known during a press conference in Osogbo on Wednesday.
While describing the looting allegation against Oyetola as not only ridiculous but sarcastic as it was intended to soil the reputable image of his principal, he expressed disappointment at the false alarm raised by Adeleke’s men who, according to him, should have been ordinarily guided by the record of the inventory taken before the formal handover of the items in Governor’s lodge and Presidential quarters in Government House, respectively.
Slamming Adeleke and his men for the failure to protect the items bequeathed to them by the outgone administration, Omipidan queried why it took them 72 hours to formally raise allegation of looting.
He averred that it was ungodly for Adeleke’s stooges to have raised empty alarm over an illicit action taken by them adding that it is on record that the new government took over the possession of the Government House a day to the inauguration of Ademola Adeleke.
In his words, “All the items alleged to have been carted away were intact as at the time of handing over. If there was any looting as claimed by the agents of the new government, then we should look in their direction.
“My principal is a man of impeccable character. How on earth any right-thinking person will accuse him of stealing things as cheap as spoons, methylated spirit, cooker and emptying the First Aid Box?
“My principal stopped sleeping in the Government House on Saturday, November 19, 2022 and by November 26, 2022, an inventory was conducted in company of DSS officials who were attached to the Government House at the time and security operatives attached to the new Governor, particularly A. Umale and Pius Akpan.
“According to Omipidan, in the DSS report dated November 26, 2022, and titled: ‘INVENTORY OF ITEMS IN OSUN STATE GOVERNOR’S AND PRESIDENTIAL LODGES,’ it is reported that, ‘On 26th November, 2022, about 1400houre, a team of the Protocol Department, Osun State Governor’s Office, Abere, led by Mr. FALODE, in company of two(2) officers of the Department of State Services (DSS), namely Usman ADEDIRAN and Sunday Posu, painstakingly took the inventory of items in the above mentioned places.
“The items were thereafter handed over to A. UMALE and Pius AKPAN, DSS personnel and security details of the new Governor, ADEMOLA ADELEKE without any complaint.
“It is further noteworthy that nothing suggests that any of the items in the buildings were carted away, as all were intact as at the time of handing over. Attached herewith is a list of items in both buildings. And they went further to list the items one by one, covering 8 pages. In the inventory, among the items listed are: 6 Face Big Gas Cooker with Oven and 4 Face Kenstar Cooker with Oven among others.”
Responding via a statement, Olawale Rasheed, the spokesperson of Governor Ademola Adeleke condemned Omipidan for attempting to shift blame on the DSS and the police.
Rasheed noted that three high ranking officials of the past administration have spoken on the looting and it was clear that two of them, Sunday Akere and Funke Egbemode, the former Commissioner for Information and Civic Orientation admitted to the looting because they were fed up with propaganda and lying to the public.
Maintaining that the latest propaganda attempt was an afterthought, he pointed that there was video evidence everywhere to prove the allegations.
“It is utterly wicked on the part of Omipidan to attempt to shift the looting on innocent security agencies whom he claimed Oyetola handed over the assets that were looted bare.
“It was even an aberration in democratic clime that an outgoing government would claim to hand over to security agencies instead of the incoming administration. Omipidan’s afterthought denial is shameful to say the least,” he said.
Recall that on Tuesday, November 29, 2022, the Osun Deputy Governor Kola Adewusi during the inauguration of the review committees set up by Governor Ademola Adeleke revealed that the state of affairs of the State is nothing to write home about.
Adewusi also revealed that the official quarters of the Deputy Governor is empty as it has been stripped of all valuables.
Meanwhile, on Wednesday, November 30, 2022, the former Deputy Governor, Benedict Alabi debunked the allegations of looting and carting away items from the Government House and described it as unverified and spurious.
Top Stories