ESN, the militant arm of the Indigenous People of Biafra (IPOB) had been invited by the communities to assist in warding off marauding herdsmen suspected to be of Fulani extraction, who have been terrorising residents. 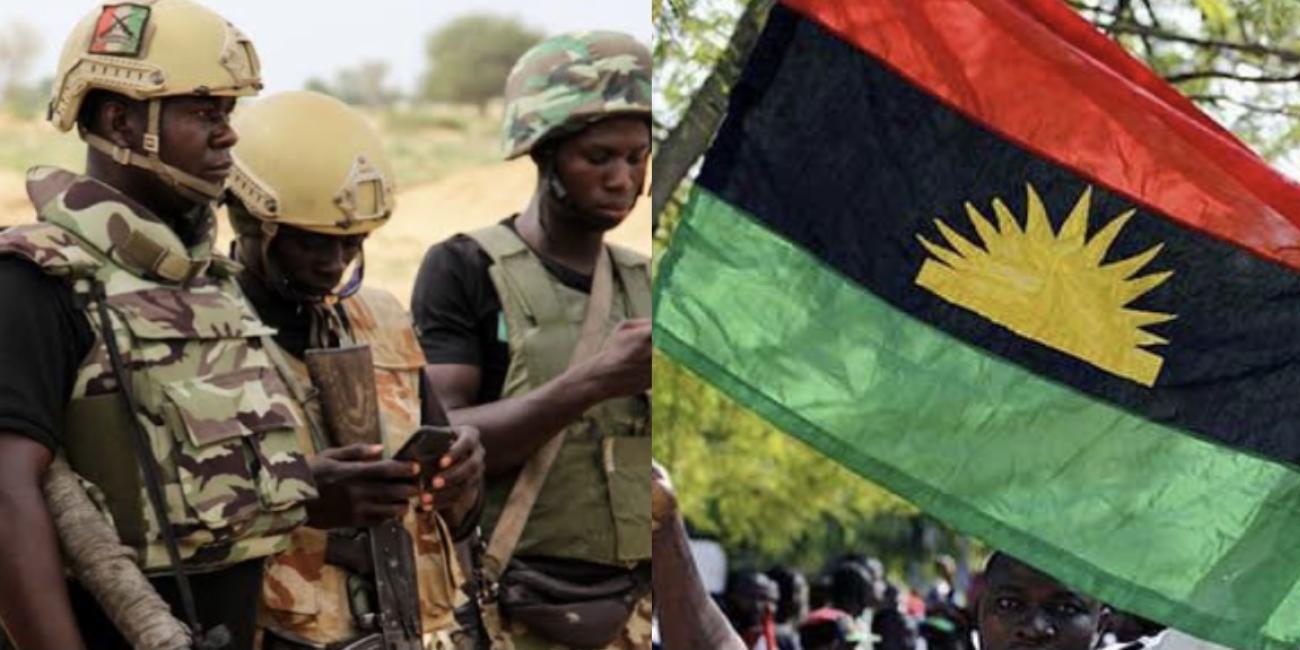 According to a report by SaharaReporters, Eha-Amufu and nearby communities in Isi-Uzo local government area of Enugu State have been deserted.

The communities have become a ghost area after Nigerian soldiers reportedly engaged operatives of Eastern Security Network (ESN) in a gun duel.

ESN, the militant arm of the Indigenous People of Biafra (IPOB) had been invited by the communities to assist in warding off marauding herdsmen suspected to be of Fulani extraction, who have been terrorizing residents.

IPOB is a secessionist group demanding a separate state of Biafra from Nigeria. Its leader, Nnamdi Kanu has been in detention since June 2021 when he was renditioned from Kenya to Nigeria.

SaharaReporters gathered that the soldiers along with security agents from various tactical squads of the Nigeria Police Force killed one young man during the shootout, which a source said lasted for over two hours.

SaharaReporters gathered that trouble started when the armed herdsmen invaded Isiado village in Agu-Amede community in the early hours of Wednesday.

Sources told SaharaReporters that after several hours of a heavy shootout with local vigilantes, the armed herdsmen retreated.

However, on Wednesday evening, a truck belonging to Dangote Cement was intercepted at a checkpoint in Umuhu-Eha-Amufu by Ebonyi bridge with people suspected to be Fulani herdsmen onboard.

After some resistance by the driver of the truck, the vehicle was searched and some arms and ammunition were allegedly found.

A source said the Dangote truck driver who was heading to Nkalagu, Ebonyi State had upon interrogation, said he had been cleared at several checkpoints along the Ubolo-Ikem Road, before arriving at the Umuhu bridge checkpoint.

The source said, "The local vigilantes demanded to search the truck but the driver resisted. The vigilantes insisted and found over 40 herdsmen in the truck, along with arms and ammunition.

"Many people gathered after the discovery but some soldiers soon arrived. They tried to clear the road for the vehicle and its occupants to continue their journey but some youths said no and blocked the road.

"Unfortunately, the arrival of ESN operatives who were alerted charged the atmosphere, leading to the soldiers with other security agents from the police tactical squad who equally stormed the scene to engage in a shootout with them.

"The shooting from the army unit did nothing to quell the situation as the crowd began to seize the occupants of the truck. The trailer was set ablaze shortly after and some herdsmen who were identified as being in possession of the discovered weapons were reportedly killed. It is unclear how many were involved.”

"However, the soldiers also killed a member of ESN during the shootout," the source added.

Meanwhile, Eha-Amufu town and adjoining communities have been deserted, a local security source told SaharaReporters, adding that "only us, security men are in the town."

"We are envisaging that security agencies, especially the military that have been complicit in the undeclared armed herdsmen 'war' on our communities will come back to attack our communities," he said.

SaharaReporters had reported that no fewer than 20 people including women and children had been killed by gunmen suspected to be herdsmen within a month during attacks on Agu-Amede, Mgbuji and Eboh communities in Eha-Amufu. Unfortunately, Nigerian security agencies have yet to arrest any of the assailants.

In the past year, 17 villages have been sacked by invading gunmen said to be herdsmen.

However, efforts made by SaharaReporters to get the reaction of the state police command were unsuccessful as the command's spokesman DSP Daniel Ndukwe did not answer calls from our correspondent.

Also, Nigerian Army has yet to respond to a text message seeking clarification regarding the allegations that soldiers have been aiding armed herdsmen in Eha-Amufu.