Messi or Ronaldo: Mbappe Reveals His 'Greatest of All Time'


Mbappe made the remark in reaction to Ronaldo’s heartfelt message after Portugal’s elimination against Morocco in the quarter-finals of the Qatar 2022 World Cup. 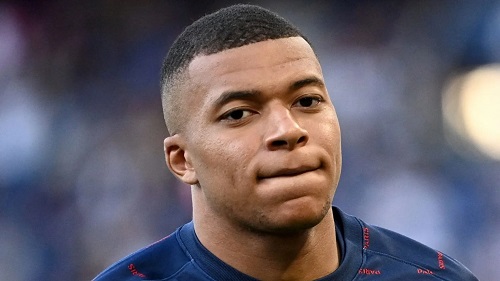 Kylian Mbappe has revealed his greatest of all time football player.
He chose Cristiano Ronaldo over his PSG teammate, Lionel Messi.
Mbappe made the remark in reaction to Ronaldo’s heartfelt message after Portugal’s elimination against Morocco in the quarter-finals of the Qatar 2022 World Cup.
“I fought for it. I fought hard for this dream,” Ronaldo stated.
At the final whistle, the Portuguese captain headed alone to the changing rooms and in the tunnel, he could not help but burst into tears as the cameras followed him.
It was one of the images that will go down in football history from this tournament.
After experiencing one of the most difficult moments of his entire career, Cristiano Ronaldo also decided to take to his social networks to send a message that ended up going around the world and one that several sporting legends reacted to not least Pele, LeBron James, and Kylian Mbappe.
Mbappe’s admiration for Cristiano Ronaldo is quite public, to the point that as a child he had his room draped with posters of the Portuguese footballer.
The Frenchman, however, responded to Ronaldo’s post with three emojis to pay tribute to his idol: that of a crown, that of hands giving thanks, and that of a goat, referring to the fact that he is the GOAT, which in English means the ‘greatest of all time’.
Mbappe’s response was seen by many as hugely controversial.
Some of the most repeated phrases in the post pointed out that Mbappe is a domestic teammate of Lionel Messi, the player that is widely seen as Cristiano Ronaldo’s greatest rival.
With that being said, Mbappe’s comment also received massive support. The comment has had almost a million likes and 17,800 replies.
Kylian Mbappe’s response was not the only one.
“Thanks for making us smile, my friend,” wrote Pele.
“Legend,” signed NBA star LeBron James.
Vinicius Jr also commented on the post by posting three emojis: a sad face, hands giving thanks, and a white heart.
Top Stories