The Principal, Mrs Tofunmi Akamo, who spoke to our correspondent on Wednesday, said the students, numbering six, were picked up from the hotel by the school, adding that the incident happened once. 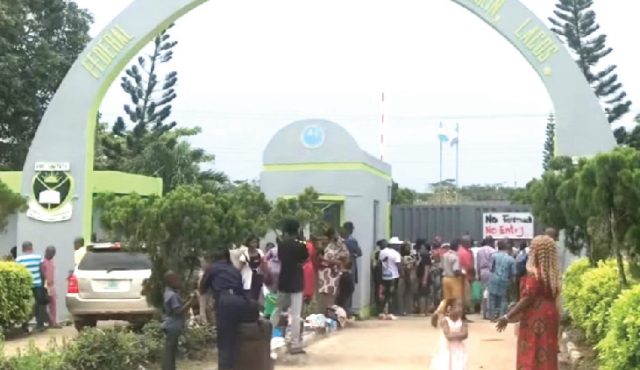 The management of the Federal Government College, Ijaniki, Lagos State, has reacted after some students were caught having s*x.

The school denied allegations of covering up some students caught absconding from school to lodge female classmates in a hotel for s*x romps.

The Principal, Mrs Tofunmi Akamo, who spoke to our correspondent on Wednesday, said the students, numbering six, were picked up from the hotel by the school, adding that the incident happened once.

PUNCH Metro had reported that some boarders jumped the school’s fence with their female counterparts and lodged in hotels for s*xual pleasure.

It was also reported that for more than three sessions, including the just-concluded first term, some of the students left the school unnoticed.

But the principal said the incident of students absconding from school to lodge in a hotel happened once.

She claimed that the school management noticed the absence of the students during an urgent roll call at the hostel.

She said, “Our assignment is to mould them and we don’t expect all of them to behave well all the time. So, when they misbehave, it is our duty to do the necessary correction.

“I was called from the school that they did a roll call on Sunday and some students were discovered not to be in the hostel.

“So, that Monday morning, they called their parents to confirm if they were at home and the parents said they were not at home. The parents came to the school; we were all searching and investigating what could have happened.

“One of the parents of those girls told us that the girls went to the hotel, jumping the fence on Sunday. We went to the hotel to evacuate them. They were five that were evacuated; two boys and three girls.

“When they came to the school, we asked them to write reports; it was through the report that we even discovered that there was another girl who left on Monday to come back to school, while others still remained in the hotel.

“We made them write their reports and they faced a disciplinary committee, which gave a verdict on what to be done to them according to the guidelines given to us from the ministry.

“The children are currently on indefinite suspension; that is the guideline recommended for them. We normally involve their parents and hand such letters and their children to them. The girls and the boys are no longer in the dormitories. That is the only incident that happened and it happened two or three weeks before we vacated this last term.”

Akamo described allegations that the students used drugs as unfounded.

“Late last session when they were writing an external examination, we discovered that some boys were not in the hostel during roll check and we learnt that they normally went to a nightclub around our school.

“My chief security officer went there around 9pm and at that time they had not arrived at the club. So, the owner of the club collected the number of my CSO so that he would inform him.

“By 11pm, they called my CSO and by 1am we brought about 10 of them back to school. One of them was my assistant head boy and immediately, we had an assembly; I brought all of them out and de-badged the prefects among them.

“I also asked them to leave the dormitories; but they could be coming to sit their external examinations, which they were writing at that time. I told them they could no longer stay in the hostel.

“There is no history of anybody getting pregnant as a student. We knew one of the girls had one million naira in her account. I am sure this child has been showing all of these things at home. It cannot be that it was inside the school that she learnt how to go and make money from s*x.

“The only time we had an issue of a pregnancy in the school was a blind girl. The lady got pregnant during COVID-19 at a place she used to go to play with people. After we did a test and we discovered she was pregnant, we invited the father and she left the school. I told her that she could not stay in the school because we are training young girls and not mothers-to-be.

“The claim by the PTA chairman that one of the students impregnated another student is not true. There is nothing like that; I am not aware and if that happens I will know.”

The Global President of the Old Students Association of the school, Toun Aderele, said the school management committee, which comprised all stakeholders of the school was saddled with the responsibility of making decisions on such issues.

Aderele added that the recommendation of the committee was always sent to the Federal Ministry of Education in Abuja for conclusion.

She also lamented that some parents had been frustrating the efforts of the school authority in instilling discipline.

She said, “There is a lot of resistance from parents. In fact, there are times parents challenge the authorities on why they should bring their children out and why they should take a certain decision.

“The old students association is always on the heels of the management to ensure that they live up to expectation. The principal has absolutely no wrong in this matter; she has stood as a principal, mother and taken all the necessary decisions.”

The Executive Director, Special Duties, National Association of Nigerian Students, Oladimeji Uthman, said the student body would constitute a committee to look into the matter.

Uthman described the act allegedly committed by the students as barbaric and disheartening.