Also, some traditional rulers in the area were alleged to be aware of the operation of the kidnappers before they struck. 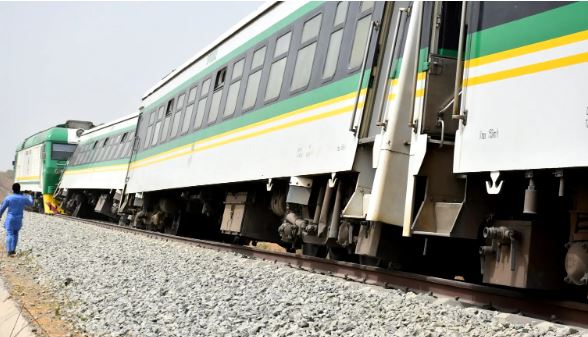 Lots of startling revelations have been made about the recent attack on a train station in Edo State.

Vanguard reports that there have been some stunning revelations on how armed kidnappers found their way into the Tom Ikimi train station in Igueben,  Edo State, on January 7, 2023, abducting some passengers and two members of staff of the Nigerian Railway Corporation.

This followed allegations that some youths in Esan land were paid  N20,000 each  and given cows to allow the kidnappers who posed as herders,  access into their forests.

Also, some traditional rulers in the area were alleged to be aware of  the operation of the kidnappers before they struck.

Already, the Police in Edo State have swung into action , with the arrest of some traditional rulers and youths in communities around the railway .

Crime Guard reliably gathered that some members of Vigilante  groups and hunters are also informants to these kidnappers. This was confirmed by some of the rescued victims who spoke  to Crime Guard on the condition of anonymity.

One of  12  victims earlier rescued said, “  They were six armed men. They announced their presence with sporadic shootings. I was to travel by train to Warri, Delta State to see my ailing father.

Immediately they came, they  started firing. The Abuja- Kaduna train attack incident came to my memory and I concluded that my end had come. “When they kidnapped us, we walked about six hours into the forest , before arriving at one of the camps, which they (kidnappers) referred to as a cell.

“While we were there, we were moved to  different places  because our captors were informed that the Police and Army were combing the forest for us.  I understand the Hausa dialect very well and  I overheard them saying one of the vigilantes told them that  the Special Force would strike very early in the morning . The second time they said they (Special Force) were in the forest and that they had identified one of the camps . This second information was brought by a vigilante, while the third informant was a hunter.

“I also heard them say they would ask one of their informants to escort them to the Delta State side of the forest where they would keep us, if security agents disturbed them further”.

When it became obvious that there was a mole among the rescue operators, Crime Guard reliably gathered that operatives of the Edo State Intelligence Surveillance Team with other security agencies embarked on a rescue mission on January 14,2023, without hunters and members of the vigilante group who were assumed to be conversant with the forest terrain. It was 9 pm.

Coincidentally, the kidnappers were taking four victims whose families had paid for ransom, to a  designated point , from where their relatives would pick them.

Meanwhile,  Crime Guard gathered that  relatives of the victims were directed by the kidnappers to wait far away from where they would drop the freed persons: a male and two females.

Then, all of a sudden , the operatives opened fire from their General Multipurpose Machine Guns , jolting the kidnappers . One of the rescued victims said , a voice , supposedly from the leader of the Police team, was heard shouting “ move to the road side and lie flat,  else , you will be killed”.

However, the operatives were careful not to fire at them in order not to shoot at the kidnapped victims. The kidnappers   were said to have run to the Igueben Amodekian  Uromi on the   Ugboha Uromi road , only to discover that they were surrounded

In the confusion, Crime Guard gathered that  the kidnappers  used the Railway Station Manager  and another victim as shield and fled into the forest, while others were forced to leave the rest victims, from where they were picked by the operatives and taken to the Police Hospital Cottage in the Government Reserved Area , Benin City , for medical attention and rehabilitation.

One of the rescued victims, Julius Iyore ,  was discovered to have  earlier been kidnapped by the same gang . He was released after  15 days in the kidnappers den , after  an unspecified amount was paid as ransom

Back in their safe haven in the forest, the kidnappers put a call to families of the remaining   two victims with them, accusing them of alerting the Police.

A  relative of one of them said, “ They told us we would pay for the ransom they did not get from those rescued by the Police. We were negotiating for N2 million , initially. But they increased it to N20 million”.

Not done, the operatives were said to have further combed the vast forest which was discovered to link communities like  Amudokhuen, Ugboha, Ilushu, Udo and Ekpoma , all in Edo State , as well as  Delta and Kogi states.

Unable to withstand the heat of the operatives, the kidnappers were said to have released the railway station manager and another passenger  few days after the 12 others were released.

One of them was reportedly found in Ewu area of the state.

During his visit to the Police Cottage hospital in Benin City where the rescued victims were receiving treatment, Governor Godwin Obaseki said , “We have information that some traditional rulers in that area do not obey and respect government decision to discourage open grazing by herders in their forests.

“I have instructed that those traditional rulers should be investigated and anyone found to be harbouring the criminal herders will have questions to answer because that was what led to this incident. Communities that obeyed don’t have such incidents in their domain”.

While he applauded the security agents in the state for proving themselves to be  formidable , he however frowned at the deployment of only one policeman at the train station, considering the Abuja-Kaduna train attack, last year.