Two siblings and their gang members have been caught after they broke into a warehouse in Ogun state and stole goods worth N30 million. 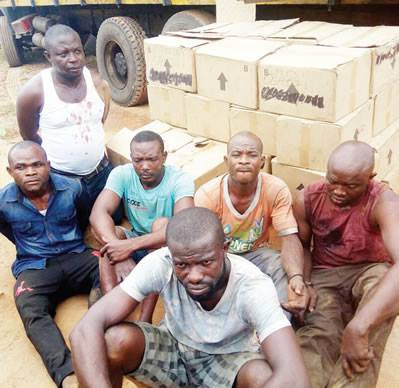 Ikechukwu Onwe, Chukwunma Onwe and  their gang members caught by security operatives
Two siblings said to be members of a seven-man robbery gang have been arrested by the police in Ogun State for allegedly breaking into a Coca-Cola warehouse in the Ota area of the state.
According to Punch, the suspects identified as Ikechukwu Onwe, 40, and 35-year-old Chukwunma Onwe and five others reportedly stole several pieces of heavy duty batteries, truck engines, air cleaners, radiators, and cartons of insecticide, valued at N30m from the warehouse.
The sibling and their gang members, Onyebuchi Muruako, 37; Obiora Onyemuazu, 49; Chidi Monday, 36, and Mutiu Olodigbo, 40, were led to the warehouse by a ringleader, who is still at large, in a truck on Monday.
It was gathered that they were offloading the stolen goods at Monday’s house in Alishiba, Sango Ota, around 6am when they were caught by some vigilantes in the area, who alerted the police at the Onipanu division.
A team of operatives, led by the Divisional Police Officer, ACP Muyideen Obe, responded to the distress call and arrested six suspects, while the gang leader escaped.
A source told our correspondent that the truck and the stolen goods had been recovered by the team.
The source said, “They were caught while offloading the stolen items at Monday’s house. He is a member of the gang, but he didn’t follow them to the operation. The driver of the truck, Olodigbo, said the gang hired the vehicle from him, but he did not know their mission until they got to the warehouse.
“He claimed that he was forced to join in packing the goods from the warehouse, but when we asked him why he followed them to Alishiba, where the loot was taken to, he started rambling. Other suspects had yet to open up on the crime. Two of them are siblings.”
The Ogun State Police Public Relations Officer, ASP Abimbola Oyeyemi, who confirmed the arrest, said the suspects would be transferred to the Federal Special Anti-Robbery Squad, Abeokuta, for further investigations.
He said, “They were rounded up while they were discharging the items in Alishiba. They broke into the Coca-Cola warehouse in Ota early in the morning and carted away valuables worth N30m. All the items, including radiators, and heavy duty batteries, were recovered from them.
“The Commissioner of Police, Ahmed Iliyasu, has directed that the case should be transferred to FSARS for discreet investigation.”
Top Stories