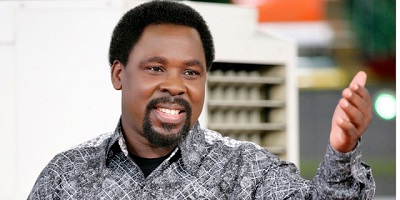 Prophet TB Joshua
Controversial man of God, Prophet TB Joshua of the Synagogue Church of All Nations, yesterday donated N10 million to Internally Displaced Persons (IDPs) in Kuchingoro Camp, Abuja.
Joshua who stressed the bad conditions in which Nigerians displaced by the Boko Haram insurgency in the North East region are living, he called for more support to improve conditions in the camps.
Represented by Olorogun Talib Tebite, the prophet also promised the IDPs that the church would also provide a medical ambulance as well as other medications to boost health care delivery in the camp.
The Prophet who enjoined Nigerians to come to the aid of the displaced persons, noted that “as creations of God, we must learn to love our neighbours as ourselves by being our brothers keepers especially in need. One way we must express our love for others is in giving”, he added.
Speaking at the event, the Emir of Daura, HRH Umar Farouk Umar, who handed the N10m cheque to the IDPs camp chairman, on behalf of the church, urged them to utilize the money prudently.
The Emir appealed to the IDPs leaders to channel the donation towards the education of children in the camp and the provision of health facility for children and women in the camp.
On his part, the IDPs Camp Chairman, Philimon Emmanuel said the bulk of the money would used to establish a clinic in the camp.While parts of it would be utilized in the provision of food and ensuring that children of secondary school age were sent to schools.
“We have been here since January 2014 and up till now we did not see something like this. We did not expect this and we cannot thank the church enough.
“We are going to have a clinic here. If we get a clinic some of our problems will be reduced. Because the first problem for us sickness in the camp and the clinic will address.

“We will buy some food items too and we have to educate our children because up till now our children that are in secondary school are not going to school. It only nursery and primary school that we have here”, he explained.
Top Stories