The Nigerian Police has been directed by the federal House of Representatives to unseal the Peace Corps headquarters in Abuja. 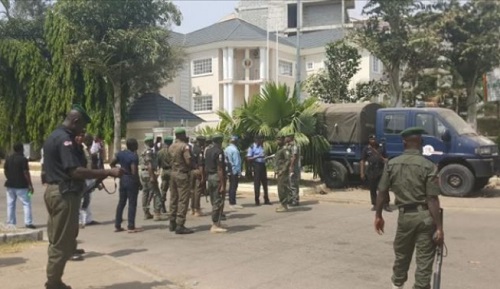 security officials biesege peace corps headquarters
The house of representatives committee on public petitions has on Tuesday during its meeting, ordered the Nigerian Police to vacate the headquarters of the Peace Corps of Nigeria in Abuja within 48 hours.
Recall that in November, a federal high court in Abuja ordered the police to unseal the headquarters of the corps which had been cordoned off since February 2017. But the place is still under seal by the police despite the court ruling.
According to TheCable, the meeting followed a petition written to the house of representatives over the purported refusal of the inspector-general of police, Ibrahim Idris, to unseal the headquarters of the organisation.
While addressing the lawmakers, Dickson Akoh, Peace Corps commandant, said Abubakar Malami, attorney-general of the federation, instructed the IG of Police to unseal the headquarters to no avail.
“There are eleven court judgements in favour of Peace Corps in this issue. There are also five letters from the AGF advising the police to comply with the judgement of the court,” he said.
Chairman of the committee, Uzoma Nkem-Abonta, asked Henry Njoku, an assistant commissioner of police in charge of legal affairs, who represented Idris, whether the claim of Akoh concerning the AGF’s letter was true, but he replied: “I cannot confirm that right now.”
Njoku then argued that the said letter is conditional as it refers to “if there is no subsisting court judgement on the matter”.
“There is a subsisting court judgement in the court of appeal. So, there is an appeal for stay of execution of the judgement before the court of appeal,” he said.
But members of the committee told him “the presence of an appeal does not nullify an existing court order”.
Uzoma-Abonta further asked him: “Are you not supposed to protect the court and justice? Is the police above the law? Apart from court orders on this, the attorney-general has written to you and you still haven’t obeyed.
“This is wickedness for not obeying court orders. We shall be leading Peace Corps into possession of its headquarters.”
After a prolonged argument bothering on the court judgements in question and the pending issues involving the police and Peace Corps at court, the committee invited the IGP and AGF to appear before it within seven days.
“We want the IGP and AGF to appear before us within seven days and tell us why the court judgement has not been implemented. We want the AGF to also tell us why he hasn’t taken further action on this,” Uzoma-Abonta said.
“For now, the police should vacate the place within 48 hours. We want Peace Corps to take possession of its headquarters, in compliance with the court order.”
Top Stories