Embattled politician and outspoken chieftain of the ruling All progressive Congress in Kogi state, Senator Dino Melaye's case has been adjourned indefinitely in court. 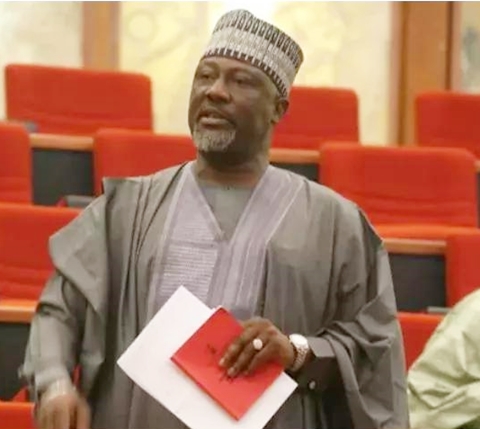 Senator Dino Melaye
A High Court of the Federal Capital Territory on Thursday, adjourned the trial of Kogi State Senator, Dino Melaye, indefinitely, on the basis of his medical condition, PREMIUM Times reports.
The police is prosecuting Mr Melaye in Abuja and in Lokoja.
In Abuja, he is accused of attempted suicide and damaging government property, after he attempted to jump out of a moving police vehicle. He was later hospitalised.
In Lokoja, Mr Melaye is accused of providing false information to police and supplying arms to thugs.
The judge in Abuja, Olasunbo Goodluck, had asked the defense lawyer, Rickey Tarfa, to provide official explanation for Mr Melaye’s absence in court on Wednesday.
Following that order, Mr Tarfa, a senior advocate of Nigeria, provided a medical report from the National Hospital, Abuja, indicating that the Mr Melaye was in critical condition and under intensive care.
The prosecutor, Shuaibu Labaran, questioned the admissibility of the medical report.
According to Mr Labaran, the medical report admitted before the court was sourced from a piece of evidence tendered at the Kogi State High Court.
Mr Labaran argued that the medical report signed by a doctor, identified as Olaomi OO. from the National Hospital, was not obtained directly from lawyers in the matter before the FCT High Court.
He asked the court to hold that the failure of the defense to certify the photocopied medical report rendered the report officially defective.
“It is our further submission that Exhibit B and C are duplicate copies of the supposed medical report emanating from the National Hospital, which the defense placed heavy reliance to convince this court as to the justification behind the absence of the defendant in this case,” he said.
“Assuming the document emanated from the National Hospital Abuja, it has become a public document which requires certification.
“Our objection is that it has no bearing with the document of this court,” Mr Labaran submitted.
Mr Labaran also alleged that the information contained in the medical report were largely subject of speculations.
There was drama when the prosecutor argued that the medical report did not indicate that Mr Melaye’s health condition was critical.
Responding to a statement by the judge that the same medical report had indicated that the defendant was currently being held at the Intensive Care Unit, Mr Labaran pledged to suspend his objection once he saw the paragraph where the word: ICU was mentioned.
“Alright read the last paragraph,” said the judge.
After reading through the paragraph, Mr Labaran admitted seeing “ICU”, but denied pledging to suspend his objection.
His volte face triggered laughter in the court.
Delivery the ruling, the court held that based on the provisions of the Administration of Criminal Justice Act, the medical report was admissible and could be considered by the court.
Ms. Goodluck therefore adjourned the matter indefinitely.
“This court is of the view that it can adjourn this matter sine-die until the medical conditions of the defendant is reported to have improved,” the court ruled.
Top Stories