Veteran Actor Cries Out For Help After Road Accident, Now Goes Around In Crutches (Photo)


A 66-year-old actor who now walks with the aid of crutches after a ghastly car accident has cried out to Nigerians for help. 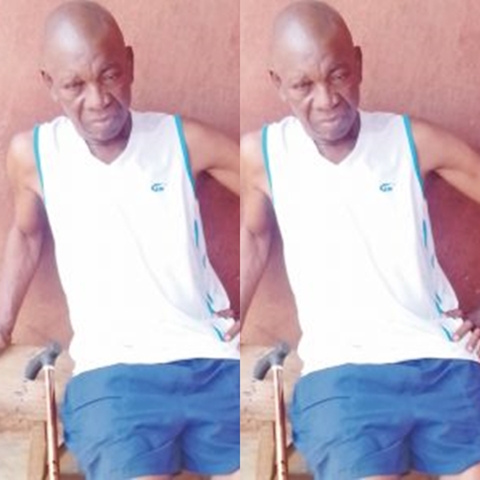 The sick actor, Duro
While speaking in a new interview with Daily Sun, veteran Nigerian broadcaster, journalist and television actor, Duro Solomon, revealed that he was critically ill and needs N4 million for a surgery after he narrowly survived a ghastly road accident.
Solomon who was a victim of a hit-and-run driver, said that he has been in and out of hospital since 2015 when the accident occurred in Abuja, adding that he has already sold off virtually everything he owned, including his car, to offset his hospital bills.
He said: “On November 15, 2015, by 8.30 p.m., I was standing along Gwarimpa Housing Estate to get a bike home when a fast-moving car suddenly knocked me down and dragged me into a gutter, abandoned me and sped off.
“I was in that gutter for over 12 hours when a Good Samaritan spotted me and rushed me to Kubwa General Hospital. After I was examined, it was discovered that I had a broken hip, fractured arm and leg, twisted ankle and bruises all over me. The hospital had no facility for hip X-ray, so I was taken to Gwarimpa General Hospital, where I spent 102 days.
“My problem now is, I go in and out of hospital due to the severe pains I usually experience in my hip and knee joints. Right now, I can’t walk straight and the doctor said I need an urgent surgical operation, which will involve the replacement of my hip bones.
"The doctor put the total cost of my treatment, including the surgical operation, laboratory tests, drugs, hospital admission and others at N4 million, if I am to be treated locally and N7 million if I am to be treated abroad. I don’t even have N2,000. In fact, I have to rely on relations and friends to feed myself.”
Solomon’s medical report, dated January 10, 2018, produced by Cedarcrest Hospital, Abuja, and signed by Dr. Sidiq Salawu, a consultant orthopaedic surgeon, noted that “radiographs showed evidence of an old LT acetabular injury with advanced secondary osteoarthritis, which needs total hip replacement.”
The 66-year-old actor, who now walks with the aid of crutches, said he would be grateful if Nigerians could help him. His account name and number at the United Bank for Africa is Duro Solomon, 1017160156.
Top Stories