Some thugs have reportedly invaded the All Progressives Congress Secretariat in Ondo state capital city. 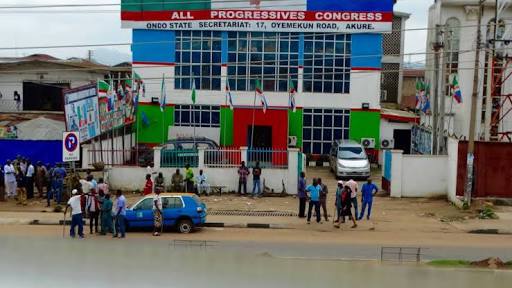 File photo: Ondo APC Secretariat
The residents of Okitipupa in the Okitipupa Local Government Area of Ondo State, on Thursday, scampered to safety as thugs invaded and disrupted activities at the All Progressives Congress Secretariat.
The News Agency of Nigeria reports that the thugs destroyed parts of the secretariat, setting party flags ablaze and tearing posters of candidates vying for chairmanship, councillorship and ward leaders’ positions pasted at the secretariat.
A witness who preferred anonymity told NAN that the thugs, who came in their large numbers, besieged the secretariat chanting solidarity songs.
The witness said, “Some of the thugs stormed the secretariat to disrupt activities and tear posters of candidates, just as many of the people scampered to safety.
“Their action is not unconnected with the alleged mishandling of delegates’ lists and names submitted for Ward positions by some leaders of the party at the state level.”
The witness also said that the thugs warned that peace would not reign at the forthcoming chairmanship and councillorship elections in the local government, should the will of the people not be respected.
“They said that until the names submitted at ward levels for the posts are restored and the voice of the people respected, peace will not reign in the forthcoming elections,’’ the witness quoted the thugs as saying.
Meanwhile, the APC Chairman, Okitipupa local government, Mr Bode Ikulala, who confirmed the incident, told NAN that the delegates’ lists were not out as of the time the disruption took place.
He said that the people concerned should have registered their grievances through appropriate quarters, rather than taking to violence.
“I was in Akure when the incident happened and they told me that some people came to destroy things at the secretariat over an alleged change in delegates’ lists, which have yet to be released, even as we speak.
“Those people are certainly not APC members, because if husband and wife have differences, for instance, and the house is destroyed, when they later settle, where will they live?’’ he asked.
Ikulala, however, said that the situation would be brought under control as he had contacted the Police over the matter.
The Ondo State government would be conducting elections for chairmen and councillors in the 18 LGAs of the state in December.
Top Stories