Oshiomhole has been meeting with party members, particularly lawmakers in the lower legislative chamber, in a bid to remove Dogara. 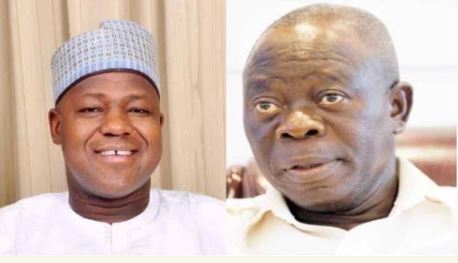 Yakubu Dogara and Adams Oshiomhole
Adams Oshiomhole, national chairman of the All Progressives Congress (APC), wants Yakubu Dogara removed as speaker of the house of representatives.
A source told TheCable that Oshiomhole has been meeting with party members, particularly lawmakers in the lower legislative chamber, in a bid to remove Dogara.
The source said the APC chairman intensified efforts to oust the speaker after news broke that he would seek reelection on the platform of the Peoples Democratic Party (PDP).
Some constituents of Dogara presented PDP nomination form to him on Thursday and urged him to leave the APC. Dogara has not publicly announced his defection from the ruling party though he has not been participating in its activities.
He was absent at last month national executive committee meeting of the APC in Abuja. During the Bauchi south senatorial district bye-election, the PDP won in Bogoro local government area of the state where the speaker hails from.
The nation’s number four citizen told his supporters on Thursday that he was asked to beg for the ticket of APC. After Senate President Bukola Saraki left the APC, Oshiomhole moved against him, asking him to either resign or be removed.
Another source told TheCable that the party appears divided over the move to remove the speaker.
“Ever since the news of Dogara’s defection, Adams Oshiomhole has been meeting with representatives and top APC chieftains to see how they can impeach Dogara,” the source said.
“But they are at an impasse now, because some of them are saying that there will be chaos if they attempt to impeach Saraki at the same time.
“We don’t know what their final decision will be but they are not agreeing, and the party chairman seems to be the one who wants them gone, but the lawmakers believe that they do not have the required numbers to pull off such a feat.”
Reacting to reports of Dogara’s planned exit on Thursday, Yekini Nabena, acting spokesman of the APC, said the speaker’s political future is bleak.
Simon Egbebulem, spokesman of Oshiomhole, neither answered calls nor replied a text message sent to him on the allegation.
Top Stories