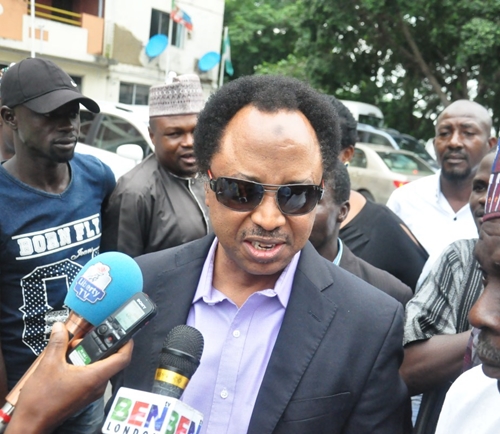 Senator Shehu Sani
Speaking while reacting to an allegation that the disbursement of the N-Power fund has been politicised, Senator Shehu Sani, criticised the programme introduced by the President Muhammadu Buhari’s administration, saying it is used as a means of maintaining grassroot political support.
According to PREMIUM TIMES, the senator representing Kaduna Central, shared the same view on the SURE-P program of the former administration of President Goodluck Jonathan.
It was gathered that the Senate Minority Leader, Biodun Olujimi, had said on Wednesday, that the N-Power fund had been “politicised” and its beneficiaries were asked to submit details of their permanent voter’s cards (PVCs).
The Ekiti lawmaker said officials disbursing the fund were circulating forms on which recipients are asked to write their names, gender and details of their PVCs, adding that such forms are accompanied by another from Access Bank containing details of payment.
The Senate has decided to investigate the allegation setting up a seven-man committee to do the job.
In a press statement on Thursday, Senator Sani, a member of the ad-hoc committee, hit hard at both the Buhari and Jonathan administrations on the motives of their social intervention programs.
The statement reads: “The SURE-P program of the last administration and NSIP of this administration are not social intervention programs but political largesse dispensed for political goals.
“The two programs are aimed at throwing hands outs and crumbs to the masses with the aim of pacifying them and retaining their support for the political establishment and the ruling parties.
“The ideological basis and reasoning of both the SURE-P and NSIP programs is to reinforce the iniquities, inequalities and plunder inherent in the prevailing socio economic system that institutionalised the class privilege of a few against a many.”
Instead of being disbursed to the vulnerable, Sani said the funds were channelled at grassroot political supporters to “neutralise possible resistance”.
“The SURE-P programs was designed to build up the grassroots support base of the PDP and the N Power was designed to build the grassroots support base of the APC.
“SURE-P AND NSIP are institutionalised state generosities and philanthropy presented as social intervention while actually intended to neutralise mass resistance against social injustice and inequality presided over by the political establishment and the ruling elites.
“SURE-P and N power are all hands outs thrown to the poor ‘to purchase their conscience and loyalty’
“SURE-P was a larcenous bread of corruption and N Power is a butter of social deceit.
“Nigeria’s poverty problems can’t be solved by a ration system of throwing peanuts.
“N-Power is a repackaged SURE-P program that only encourages the culture of social dependency on state handouts,” he said.
Top Stories