Lagos socialite, actress, filmmaker and businesswoman, Mercy Aigbe has always been accused of living above her means with rumours having it that she might be warming the beds of rich men. 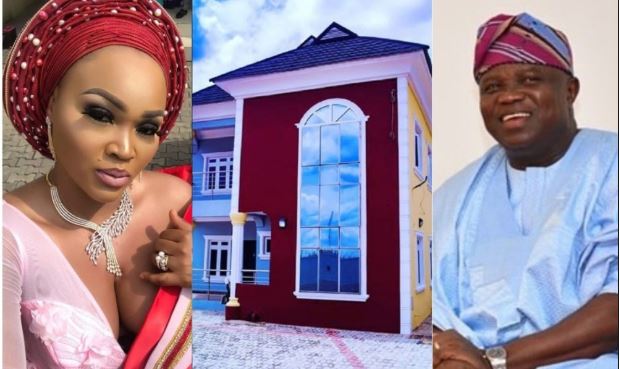 Mercy Aigbe, the house and Governor Akinwunmi Ambode
Mercy Aigbe has finally spoken up on her alleged romance with the outgoing governor of Lagos State, Governor Akinwunmi Ambode.
The 41-year old apparently stirred the hornets' nest when she announced the acquisition of a multi million naira house in Lagos State last year, 2018.
Months later, she also bought an exotic Prado jeep, expensive clothes and shoes coupled with frequent trips abroad.
This gave life to a rumour that she was secretly romancing the embattled Ambode who was denied a second term in office after falling out with his Godfather, Asiwaju Bola Ahmed Tinubu.
Speaking to a gathering of Nigerians in Canada, the woman of Edo descent and University of Lagos graduate denied ever meeting Ambode.
"I want to set the records straight, I do not have anything to do with him (Ambode) but you the truth about life is that when you doing well and people don't know your source, they keep speculating, they keep fabricating alot of things just because they do not know your source.  Olorun a tu bo ma bo wa lasiri o (May God cover out secrets *Yoruba language*). You know so thats just it
I do not have anything to do with him. I have not met with him one one one. Where that rumour came out from I do not know. But it is fine, he is a governor" she said amidst cheers from the people present.
It should be noted that majority of the actresses who rarely feature in movies flourish financially while most of their seemingly hardworking male counterparts wallow in penury and survive on the rare benevolence of the wealthy class.
Watch the video below: