How Game Of Thrones Enraged Its Audience


The biggest show on earth has faltered unforgivably and fans are very angry indeed. Can it claw it back for the finale? 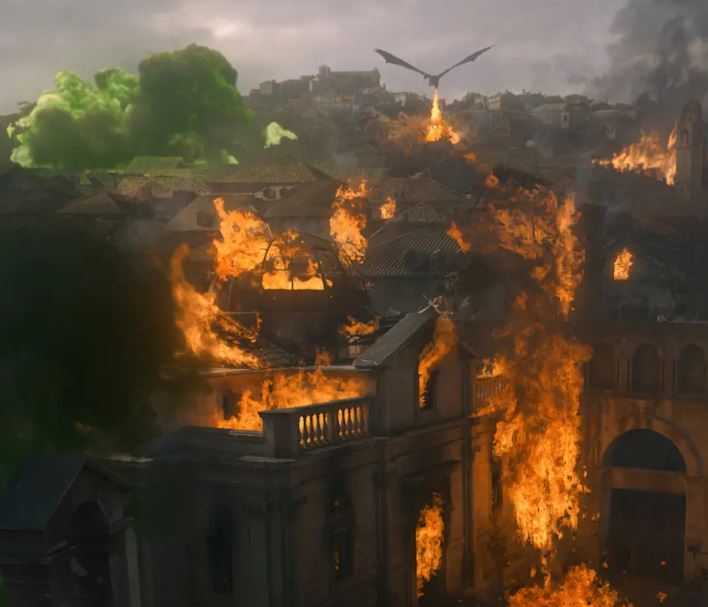 An image from the latest episode
Here’s a big spoiler that has suddenly become very hard to avoid: everyone hates Game of Thrones now.
Or at least that might be how it appears, going by the enthusiastic scourging of the final season on social media and beyond. What should have been a celebratory victory lap for the world’s foremost TV obsession has turned out to be something far more compromised and ungainly. Season eight has featured a lot of unexpected (but not necessarily unwelcome) downtime with much-loved goodies interspersed with thundering action sequences that have either forced viewers to squint through twilight gloom or simply threatened to deafen them with the sound of falling masonry. If Game of Thrones used to swagger, now it seems to be stuttering.
Some of this backlash was in effect even before this week’s right old ding-dong about The Bells, the penultimate instalment of the entire saga. Daenerys’s snap decision to stage a gigantic open-air barbecue using the innocent serfs of King’s Landing was an injury-time character development that enraged substantial segments of Thrones fandom. Even those who predicted a Khaleesi heel-turn might frown at the nagging thought that she has basically been spinning her wheels for most of season eight. If Daenerys and just one dragon were so easily able to rout Cersei’s forces, why did she not just rock up to the Red Keep in attack mode as soon as she set foot back in Westeros before turning her attention to the Night King? (There are lots of possible answers to this question relating to her wobbly alliance with Jon Snow and dwindling team of special advisors but the key explanation would probably be “because then there wouldn’t have been a story”.)
With such a sprawling, multi-tentacled tale, it was always going to be tricky to stick the landing. There has never been a show quite like Game of Thrones before, so it can only be held to its own previously skyscraping (and perhaps slightly over-praised) standards. One of the most appealing things about this morally murky epic has been its ability to surprise, and not just with rug-pulling murderous betrayals. Between seasons three and six, there was a steady stream of new faces added to the mix – perhaps by necessity, due to the high mortality rate – plus sojourns to new locations that kept expanding the scope of the story. This was grandiose world-building laced with cut-throat glee, confidently filling out that gigantic clockwork map the camera swoops through during every opening credits sequence. 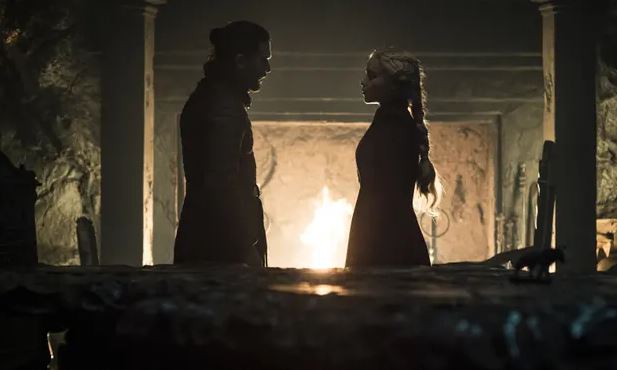 Once the decision was made to wrap things up with two shortened seasons, all those scattered plot threads had to be gathered back together to tie up into a bow. The focus turned inward, and the winnowing began. As the story coalesced – bringing together characters previously separated by oceans – the rhythms necessarily changed. There were fewer episodes, albeit often with baggier running times. Despite all the blood and thunder of recent set-pieces, the biggest show in the world has essentially been shrinking since 2017. So to compare the final season with its earlier imperial phase seems a little unfair. For good or ill, they are different beasts.
Perhaps it is also because of the insidious ways the real world has intruded on the fantasy, and not just in the form of that disposable coffee cup in Winterfell’s Great Hall. The intense media focus on the nuts-and-bolts of how Game of Thrones is manufactured has been a weird parallel feat of world-building, to the extent that showrunners David Benioff and DB Weiss have practically become characters in the story.
The seemingly insatiable hunger for behind-the-scenes tidbits and insider info during the last few seasons of production means that the Game of Thrones writing room feels almost as tangible a location as Riverrun or Highgarden. (It is certainly very easy to picture a whiteboard with R+L=J written in giant letters with a big tick next to it and the word CLEGANEBOWL excitedly underlined in red.)
If the Iron Throne was melted to misshapen slag by Drogon’s fiery assault – and judging by the smoking crater that was left once Daenerys was finished, that seems a possibility – it would probably serve as an appropriate metaphor for how a seemingly bulletproof show lost its way. But after eight seasons and 72 episodes, it is hard to imagine even the most irate fan refusing to tune in for the ultimate finale. There is still time for one last stiletto surprise, which, let’s face it, would be classic Game of Thrones.
Source: The Guardian
Top Stories