The overall best graduating student at the Lagos State University has opened up on how he supported himself through school. 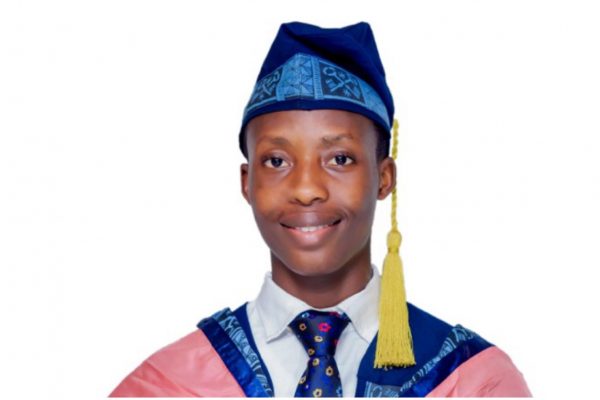 Ola-Gbadamosi Ridwan Oladotun
According to Daily Trust, Ola-Gbadamosi Ridwan Oladotun, the overall best graduating student for 2017/2018 academic session with 4.88 CGPA at the Lagos State University (LASU) has narrated how he reared chicken to meet his personal and academic needs while in school.
He said it was difficult for his father to pay his first tuition fee of over N280,000 when he gained admission into the university in 2013.
Oladotun, who finished from LASU’s faculty of Engineering emerged best overall graduating student together with one Nneka Karen Enumah of the faculty of Science as they both graduated with CGPA grade of 4.88.
To assist his father financially, Oladotun, in his valedictory speech at the 23rd convocation ceremony of the University, said he decided to invest the cash prize he received at his secondary school Speech and Prize Giving Day in the production of 150 broilers, which he successfully raised from day old chicks till maturity during the 2013 Academic Staff Union of Universities (ASUU) strike.
“I remember using bandage to wrap their broken legs and a sipping straw to administer drugs on one of the birds not because I cared about their health but because I was desperate about making the desired profit. The return on the investment was used to cater for my personal and academic needs,” he said.
Narrating how the journey began, the Engineering graduate said, “I attended Federal Government College, Ijanikin Lagos where I finished as the best graduating student in 2013.
“My flair for Physics and Mathematics was at its peak, driven by my inquisitiveness to unravel what was behind the functioning mechanisms of structures and systems.
“So, I decided to study Mechanical Engineering. Though, paying the tuition of LASU Engineering students as at 2013 (N284,750) was a big task mindful of the fact that two of my younger siblings were getting ready for tertiary education and my father had the onerous responsibility to shoulder all of the financial demands from all of us.
“Meanwhile, my late mother, Mrs. Aishat Adejoke Ola-Gbadamosi who would have supported him died while I was 12 years old. Eventually, my father was able to pay the full tuition, while l had to take charge of other associated expenses.”
His Matriculation Day, according to him, was a bitter-sweet day for him; while he was basking in the joy of being a university student, the thoughts of how his father was going to pay his humongous tuition fees for the remaining four years of his studies never eluded his mind for a seconds all through the ceremony. Then, he took a decision that changed his story for the better.
“I made up my mind out of sheer determination to obtain a very good CGPA because I knew with this; I would be able to apply for undergraduate scholarships offered by several companies.
“I made good my pledge and I became a beneficiary of the Nigerian Liquefied Natural Gas, MTN Foundation and Federal Government Scholarships amongst other grants which were utilized in paying my school fees and other sundry expenses,” he narrated.
He called on government to create an environment that will attract more of foreign investors and collaborators in the field of Engineering. This, he said, will enable the country to have the right manpower to drive its industries and in the long run improve the gross domestic product capacity of the country, while reducing unemployment simultaneously.
“Equally, Nigeria will experience youth’s application of information and other technological means to solve humanity’s problems rather than using existing ones for cyber bullying and other crimes,” he added.
Earlier in his convocation address, the Vice Chancellor, Professor Olanrewaju A. Fagboun, noted that for the first time, the University graduated 57 first class students. While he tasked the graduands on the challenges ahead, he advised them not to entertain self-doubt.
Top Stories