Mohammed had said Atiku and the PDP were working to make Nigeria ungovernable with the intention of overthrowing President Buhari. 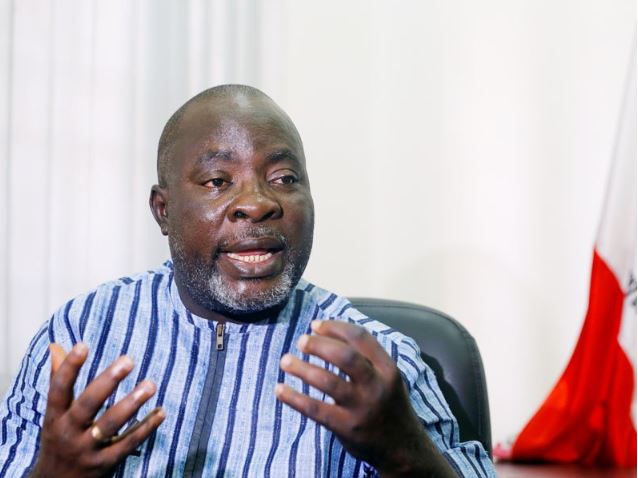 Kola Ologbondiyan
The Peoples Democratic Party, PDP, on Sunday reacted to claim by the Minister of Information and Culture, Lai Mohammed that its 2019 presidential candidate, Atiku Abubakar was plotting to overthrow the President Muhammadu Buhari-led Federal Government.
DAILY POST had reported that Minister of Information and Culture, Alhaji Lai Mohammed, at the 2019 edition of the Annual Ramadan Lecture held at Oro, Kwara State, declared that the opposition were trying to “reverse” democracy.
Mohammed had said Atiku and the PDP were working to make Nigeria ungovernable with the intention of overthrowing President Buhari.
He had made the allegation at the 2019 edition of the Annual Ramadan Lecture held at Oro, Kwara State.
However, spokesperson of PDP, Kola Ologbondiyan said the claims were signs of desperation by the All Progressives Congress, APC, to hold onto power.
Ologbondiyan alleged that APC was plotting to fabricate accusations against the PDP and Atiku.
The statement reads: “To say the least, despicable that in their desperation to hold on to power at all costs, President Buhari’s handlers and the APC engaged in this sneaky disinformation, internet lies and smear campaigns against PDP Presidential candidate, Atiku Abubakar.
“It is also unpardonable that instead of owning up, the Federal Government and the APC, through the Minister of Information and Culture, Lai Mohammed, are seeking to cover their tracks and divert public attention from their devious acts by making unsubstantiated security
“The Facebook revelation exposes how President Buhari, in his claimed integrity, allowed the enlisting of criminals, hackers and internet fraudsters in the desperate attempt to manipulate the views of Nigerians against Atiku Abubakar; a scheme which failed as Nigerians had already made up their minds to do away with the incompetent, deceptive, vindictive and corrupt APC administration.
“Our party has information of how the APC had to resort to crude manipulation of the electoral process to muscle votes and alter election results after it failed in the smear campaign project.
“The APC has now commenced a renewed plot to engage in fabricated security accusations against the PDP and our Presidential candidate in another desperate stunt to play the victim and divert attention from its endless election manipulations, all in the ill-fated attempt to demonize the PDP, hoodwink Nigerians and confer legitimacy on the outcome of the rigged election.”
Top Stories