Peruzzi has taken to his social media page to tender an unreserved apology to social media influencer he assaulted. 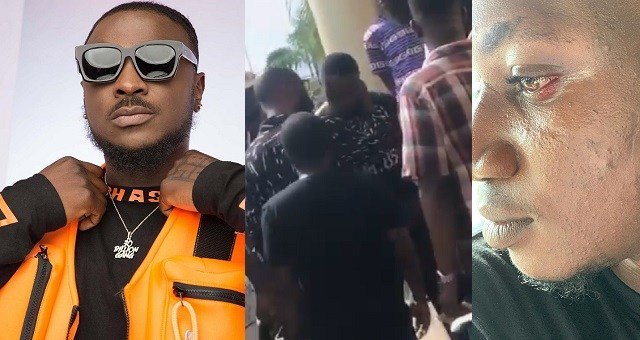 Peruzzi and Pamilerin
Musician, Peruzzi has apologized to social media influencer, Pamilerin after slapping and assaulting him.
He took to micro-blogging platform, Twitter, to issue a public apology.
He wrote:  “I did very wrong for yesterday slapping mr pamilerin, let my feelings get the best of me and I am very sorry. Apologies to mr pamilerin and also to the general public. I’d never get into such mess again. Love Only, I promise.”
The music star earlier made confirmed the assault during a radio chat with Dotun of Cool FM. According to him, he accosted the popular social media influencer because of his continuous inciting statements concerning his career.
Dotun then asked him if he actually slapped him when they saw each other in Bayelsa to which he gave an affirmative response.
“I slapped him. It was wrong, but I’m a human being,” he said. On why he slapped him, Peruzzi said, “I didn’t assault him o, I wanted to have a conversation with him and it didn’t turn out well.”
He then went on to apologise to Pamilerin for slapping him and advised him to stay away from him.
“I’m sorry for slapping you. I’m sorry for hitting you… You do not have to like my music, but please do not insult me, leave me alone,” he said.
Top Stories