A fire outbreak has engulfed the only hostel in a Government Girls College in Adamawa state. 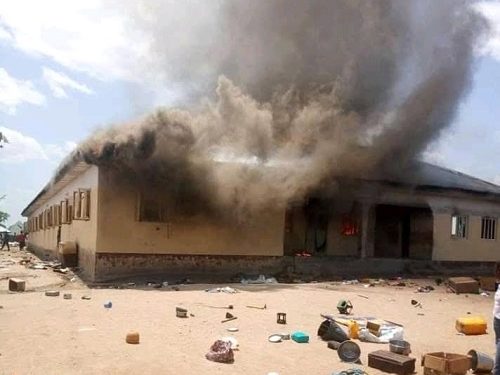 Photo credit: The Nation
The only hostel block used by the boarding students of the Government Girls College, Mayo-Belwa, Adamawa State has been destroyed by fire, The Nation reports.
The college had two hostel blocks but one was destroyed by fire last year.
Plans were on to get it rehabilitated when the remaining one was gutted fire Tuesday morning.
An official of the Mayo-Belwa Local Government Area, Aliyu Isah, who spoke to our correspondent on the phone, said: “The only hostel of the school has just been destroyed. It has been consumed by fire.”
Explaining further, Aliyu Isah, who is the clerk of the Mayo-Belwa Legislative Council, said: “We have not determined the cause of the fire yet, but we put it to electricity malfunctioning.
“It is sad because the students will now have to be dispersed. This is the only hostel block standing after the first of two hostel blocks was similarly destroyed by fire last year.”
He could not be specific on the number of affected students but he said they would not be less than 80.
He however stated nobody was injured as a result of the fire incident.
Mayo-Belwa, the council headquarters where the Government Girls College is located, is in the Adamawa Southern Senatorial District, about 70 kilometres from the state capital, Yola.
Top Stories