The Nigerian Ports Authority has alleged that a Federal Ministry stopped it from fixing the Apapa Wharf road. 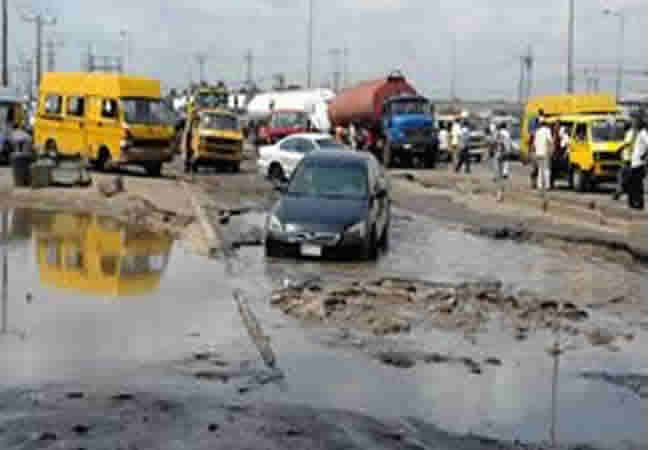 File photo: Apapa wharf road
According to a report by Punch Metro, the Nigerian Ports Authority said the Federal Ministry of Works, Power and Housing prevented it from fixing some parts of the deplorable Apapa port access roads.
The agency spoke in reaction to wide condemnation by some port stakeholders, following a recent incident where a 40-foot container fell on three cars in Lagos.
The General Manager, Corporate and Strategic Communications, NPA, Jatto Adams, said NPA had indicated willingness to fix some parts of the road leading to the port.
In a social media comment, Adams expressed NPA’s concern over the difficulties suffered by port users and the various losses they incurred as a result of the very poor state of the roads leading to the largest port in West Africa.
He said, “While this incident is regrettable, it is on record that the present management of the Nigerian Ports Authority, under the leadership of Hadiza Bala-Usman, had before now written series of letters to the Federal Ministry of Works, Power and Housing to hand over the port axis of the road to NPA for complete reactivation at NPA cost to no avail.
“It took the personal intervention of the MD to involve Dangote and Flour Mills with NPA counterpart funds to re-construct the Wharf road from Leventis to Apapa port.
“The NPA is not unmindful of the havoc and damage this road is causing the port operations and the revenue loss, albeit the sufferings to the port users but as stated the management is handicapped and not that nothing is being done.”
A recent video that went viral showed three imported cars being crushed by a fallen cargo-laden container.
Speaking on the issue, a maritime and logistics expert, Tunji Olaosun of Hermonsfield, said NPA could not be blamed for not fixing the roads as it was not its legal duty to do so.
“By law, NPA is not responsible for fixing roads. If not that the government has promulgated a law permitting private firms to partake in road construction, a private firm would be committing a crime if it takes up repairs or rehabilitation of any road in the country,” he said.
Top Stories