The story has been told of a sleeping woman who was forgotten inside a plane and woke up alone in the aircraft. 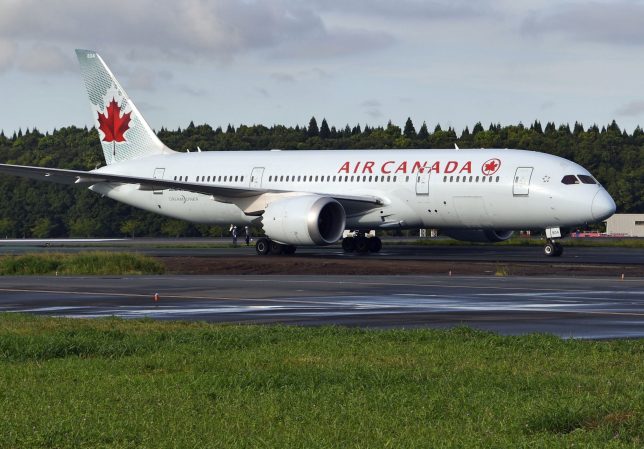 The woman was stuck on an Air Canada plane
A woman suffered a panic attack after she woke up alone inside a locked plane.
Tiffani Adams found herself in pitch black after falling asleep inside an Air Canada plane in Toronto.
The mum-of-two had gone for a snooze on the flight when returning from visiting friends in Quebec but no-one had woken her up when they landed. Ms Adams was sleeping for hours before she woke up at around midnight on June 9.
She wrote on Facebook: ‘I fell asleep probably less than halfway through my short 1.5 hour flight.. I wake up around midnight (few hours after flight landed) freezing cold still strapped in my seat in complete darkness (I’m talking pitch black) as someone with and anxiety disorder as is I can tell you how terrifying this was.’
Ms Adams tried to charge her phone so she could call for help but the power on the plane had been switched off. During her time on the plane she said she had to use the toilet, which she described as ‘no picnic’ because she couldn’t see anything.
Ms Adams eventually decided to open the door but she could not jump down because it was a 50ft drop to the runway. Luckily a luggage cart driver spotted her when she used her flashlight.
Ms Adams added: ‘When I see the luggage cart driving towards me I am literally dangling my legs out of the plane..he is in shock asking how the heck they left me on the plane..I’m wondering the same (when my seat an inch back or my tray down flight crew take notice but yet you missed a person still strapped into her seat and just all go on home?!?!’
Air Canada said it was ‘in contact with’ with Ms Adams over the incident.
She added she was having ‘recurring night terrors’ that were making it hard for her to sleep following the incident.
***
Source: Metro UK
Top Stories