The mammoth crowd that witnessed his evidence-in-chief, on Tuesday, responded with shouts of victory at every answer to his cross-examiner. 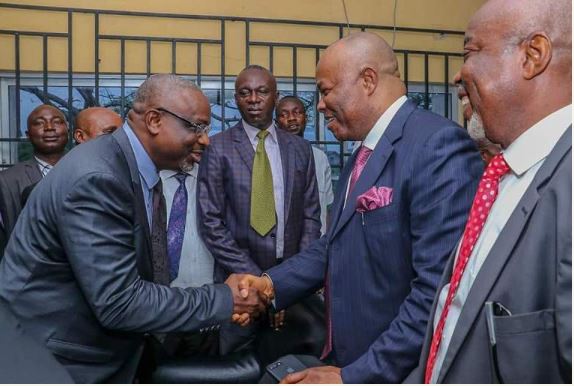 Senator Godswill Akpabio (middle)
Former majority leader in the Senate, Senator Godswill Akpabio, was recently held 'hostage' at the court premises last Tuesday by his admirers who had earlier trooped the venue of the tribunal in Uyo, the Akwa Ibom State capital.
Akpabio is challenging the declaration of Chris Ekpenyong of the People's Democratic Party, (PDP,) as the winner of the February 23, 2019, Akwa Ibom North-West senatorial district election in the state.
The candidate of the All Progressives Congress, (APC) in the election, Sen. Akpabio, is contesting the result of election, which he has accused the Independent National Electoral Commission, (INEC,) and its Resident Electoral Commissioner, (REC), in the state, Mike Igini, of manipulating the outcome of his last senatorial election results to favour his major opponent, Chris Ekpeyong.
Chris Ekpenyong, PDP, INEC, and Mike Igini are the respondents in the petition.
The mammoth crowd that witnessed his evidence-in-chief, on Tuesday, responded with shouts of victory at every answer to his cross-examiner. At a point, he could not go outside the courtroom, for fear of being mobbed by the crowd made up of mainly youth, men and women. At the end of his testimony, few minutes after 7pm, the crowd went wild with the song of, "all what we are saying, give us Akpabio!" They later burst into various cultural songs; all to the admiration and amazement of those present at the court premises. His security details had hectic time controlling the surging crowd that wanted to have a glimpse of him. They had patiently waited under the rain and sun for almost thirteen hours, to at least have a hand shake with him. This made him to remain in the courtroom more than it was necessary.
Meanwhile, Akpabio, who told the tribunal that he was so sad that INEC in the state could connive with his opponent to carry out such massive manipulations against his candidacy, insisted that he won the majority of the votes cast, as against INEC's declaration.
Led in evidence by his counsel, Sunday Ameh, Akpabio said: "If this is how INEC is going to conduct election in Nigeria, it is a pity." He said in his testimony that INEC showed a great deal of bias against him, by tampering with the final results from many units and wards in the senatorial district to make sure votes to him were either reduced or invalidated, to make them insignificant in the overall results in the district.
He alleged the final results announced by INEC were different from the ones announced at the polling centers across the district, immediately after voting that day. Akpabio, who was visibly agitated in the witness box, told the court that he felt so bad that the election, which he had clear majority of votes cast, was mutilated to favour his opponent in the election.
He particularly accused INEC of hooding election materials when he requested them to prepare his case. "It was what INEC gave me that I relied on to prepare my case. Out of the 169 units in the senatorial district, it was only in 116 polling units that INEC gave us true certified copy of the result sheet."
The court adjourned till Monday, July 1, for the respondents to open their case.
Top Stories