She had tried to get the needed attention to her talents but all her efforts failed until she started dancing in her underwear. 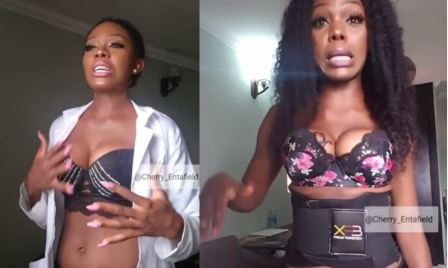 Cherry Entafield
Cherry Entafield, a Nollywood actress who sat for an interview with Saturday Beats has disclosed that she has chosen to use her boobs to get the needed attention she wants.
According to Cherry Entafield, she had tried to get the 'needed attention' to her talents but all her efforts failed until she started dancing in her underwear and also making use of her boobs for some dance moves.
“I am made of steel, I believe in my art and what I have to offer to the world. This is the means I have to express myself. I receive a lot of backlash all the time; I understand that some people don’t understand but it doesn’t bother me.
“My selling point is my bust; I’ve tried other ‘selling points’ but they did not work. I tried to be funny at some point, but I only got a few number of views. I tried poetry for over a year and still had few followers. Now, when I post some of my old poems, people are always amazed at them. When I was posting them back then, nobody gave a damn about them. My poetry and raps are gaining more traction."
Top Stories