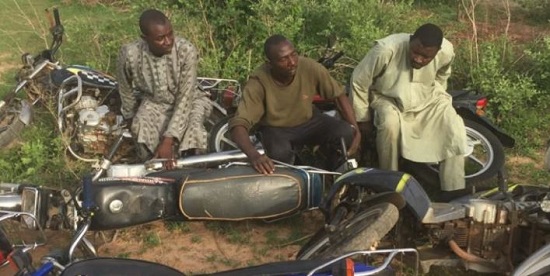 Troops have arrested 25 bandits in the forests of Sokoto and Zamfara States, the Nigerian Army announced yesterday.

Its spokesman Col Sagir Musa said in a statement that arms and ammunitions were recovered from them.

He said “Following reinvigorated operational strategies and robust anti banditry operations injected in to the activities of Operation HARBIN KUNAMA III,  troops have in a renewed efforts arrested several gangs of bandits terrorizing Isa, Rabbah and Burkusuma communities around Sububu Forest in Sokoto State as well as in Batsari, Safana and Kankara in Dumburum Forest of Katsina state.

He said the operation which covers Katsina, Kebbi, Sokoto and Zamfara States witnessed series of successful simultaneous ground operations activities involving raids, ambushes, cordon and search with the occasional support of the Air Task Force component which the troops are poised to sustain.

The GOC further stated that items recovered during the operation include:
8 x AK 47 rifles,

According to him, “The operation is to facilitate the return of refugees and internally displaced persons back to their homes, creating enabling environment for economic activities to strive and instilled confidence in the locals to remain in their villages and continue their normal lives unmolested.

He assured the residents of the Nigerian Army readiness to provide adequate security and improve synergy and collaboration with other security agencies within 8 Division Area of Responsibility with the aim of Combating banditry, cattle rustling, kidnapping and other security challenges.

He used the opportunity to commend the gallant officers and soldiers of the Division for their resilience and patriotism in the ongoing operation even as he commends members of various vigilante groups and local hunters for their supportive roles to troops.
Top Stories