Ndume said that insurgency had reduced many people in Gwoza to almost beggars and they had to wait to be given handouts in the camp before they could feed. 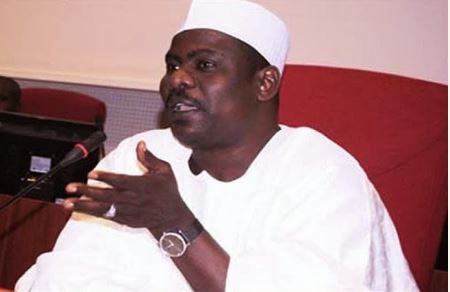 Sen. Ali Ndume
Sen. Ali Ndume (APC-Borno) has urged all Internally Displaced Persons (IDPs) from Gwazo taking refuge in Maiduguri, to return home, assuring them of their safety.
Ndume made the call on Monday while addressing the IDPs in Bakassi and Gubio camps in Maiduguri. The lawmaker, who was intermittently wiping tears with handkerchief, expressed disappointment that the IDPs from Gwoza had yet to be resettled even when normalcy had returned to the town.
He said that insurgency had reduced many people in Gwoza to almost beggars and they had to wait to be given handouts in the camp before they could feed.
“The Palestinian IDPs camp has been existing for 60 years; in Kenya, it existed for about 30 years.
“So, insecurity cannot be completely eliminated. We must therefore defy fears, summon courage and be resilient in order to achieve permanent solution to our problems.
“It is understood that some of them are traumatised because of what happened to them and they are scared they may be attacked again while some are thinking of what to do when they go back home.
“We have people of Izge and Limakara who lived inside the deep mountains, but have consistently defeated Boko Haram because they are resilient, focused, vigilant and always at alert.
“Because of their resilience, they are now expanding their territories; we can also do the same in Gwoza,” he said.
Ndume said that government had already made efforts to rehabilitate and reconstruct many residential homes, schools, clinics, palace and other social ammenities to enhance civic authority.
“The Federal Government is also focusing on rehabilitation and resetlement of IDPs through the North East Development Commission (NEDC) with an approved take-off sum of N95 billion,” he said.
Ndume recalled that the European Union recently committed about N8 billion to support Post Insurgency Response, Recovery and Resilience for the IDPs in the education sector.
The senator said Gwoza was among the nine local government areas to benefit from the intervention.
In the area of security, he lauded the Nigerian armed forces for adopting proactive modalities to secure returnees in their farmlands, homes and markets places.
Ndume expressed optimism that many farmers would record bumper harvests this cropping season, in view of improvement on security of lives and property.
“Improved security situation and support from humanitarian organisations have encouraged many farmers from Firgi, Pulka, Warabe and Kirawa communities in Gwoza to go back to their farms this year,” he said.
NAN recalled that in August 2014, Boko Haram captured Gwoza town with a population of 275,000 people and declared it the headquarters of its “caliphate.
It was later liberated by the Nigerian military.The Boko Haram insurgency had allegedly killed more than 27,000 people and displaced 1.8 million others in the North-East.
Top Stories