Abbo in the viral video on Tuesday was seen descending on the woman after she pleaded with him not to physically assault the shopowner. 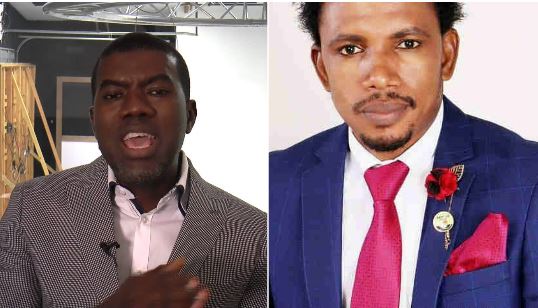 Reno Omokri and Elisha Abbo
Reno Omokri, former aide to ex-President Goodluck Jonathan, has joined the long list those calling for the arrest and prosecution of the Senator representing Adamawa North District in the National Assembly, Elisha Abbo, for assaulting a lady in an adult toys shop in Abuja.
He said the Senator should be prosecuted and jailed for his action.
Abbo in the viral video on Tuesday was seen descending on the woman after she pleaded with him not to physically assault the shopowner.
The lawmaker had accused the shopowner of calling him a drunk.
Reports have it that the Senator has not been arrested despite the case being reported to Police station in Abuja.
The video has since stirred controversy online as Nigerians and prominent individuals are calling for his arrest.
Reacting, Omokri said Senator Abbo should be immediately rejected, following the evidence against him.
In a series of tweets, the former presidential aide said the action of the Senator was an indication that he is unfit to be a lawmaker.
"Not only should Senator Abbo be arrested, prosecuted & jailed, but the policeman that was with him should be disciplined. Additionally, the lady he assaulted should get damages. Abbo can use some of the money he spends on relaxing his hair to pay her #FreeLeahSharibu #RenosDarts
“I call on the @OfficialPDPNig to immediately repudiate Senator Abbo in the face of overwhelming video evidence proving that he is not a man of fit and proper character to hold the distinguished office of a Senator of the Federal Republic of Nigeria #FreeLeahSharibu #RenosDarts,” he tweeted.
Top Stories