Mr Gbajabiamila, unlike his Senate counterpart, however, announced different names for the various minority leadership positions. 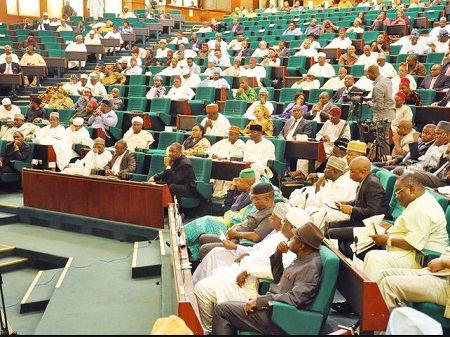 The Speaker of the House of Representatives, Femi Gbajabiamila, on Wednesday named Ndudi Elumelu as the House Minority Leader.

The announcement was vehemently rejected by many lawmakers of the Peoples Democratic Party (PDP).

The opposition party had in a letter announced Kingsley Chinda as its leader in the House.

The party’s decision was contained in a letter dated June 26 and addressed to the speaker.

An acknowledged copy of the letter sighted by PREMIUM TIMES was signed by its National Chairman, Uche Secondus, and its Secretary, Umar Tsauri.

A similar letter from the party was sent to the Senate President, Ahmed Lawan, on the party’s choice of Eyinnaya Abaribe as Senate Minority Leader.

Mr Lawan has since announced the PDP nominees as minority leaders.

Mr Gbajabiamila, unlike his Senate counterpart, however, announced different names for the various minority leadership positions.

The PDP is the largest minority party in the House. Both Messrs Chinda and Elumelu are members of the party.

The PDP had asked its members to vote against Mr Gbajabiamila when the latter was contesting for the House leadership position. Many believe Mr Gbajabiamila’s action was his way of getting back at the PDP.

Why Gbajabiamila Acted
Mr Gbajabiamila announced he received a letter from about 90 opposition lawmakers. He was then interrupted with a ‘point of order’ by Mr Chinda.

Mr Chinda while moving his point of order noted that where the house rules are not clear on specific issues, precedence and practice are applied.

He said the practice had been that the political parties write to the parliament.

“Collating signatures to nominate leadership has never been the practice.”

He said the PDP had forwarded a letter to the speaker with an acknowledgement to the office of the speaker.

Mr Gbajabiamila while reacting to the point of order ruled Mr Chinda out of order.

The development turned the session into rowdiness, with several PDP lawmakers protesting against the planned announcement.

An unidentified member went straight and grabbed the mace which prompted the sergeants-at-arms to swiftly move to protect the mace.

In the uproar, the speaker went ahead to make the announcements and abruptly adjourned the plenary.

He was guarded out of the chamber amid cheers and jeers.

Precedence, Practise
It has always been the usual practice in the National Assembly that a political party nominates either the majority or minority leaders.

In the Eight Assembly, the All Progressives Congress (APC) nominated Mr Gbajabiamila as House leader, alongside others.

A letter was communicated to the then Speaker, Yakubu Dogara, and the announcement was subsequently made.

However, the case was different in the 8th Senate.

But the then Senate President, Bukola Saraki, went ahead and announced Ali Ndume as the Senate Leader.

Ahmed Lawan-led faction objected to the reading of the list by Mr Saraki but their efforts were not enough.

Kabiru Marafa who raised a point of order was ruled out of order by the Senate president.

The announcements further widened the gulf between Mr Saraki and the leadership of All Progressives Congress.

FORMER MEMBERS REACT
Aliyu Madaki, a former member of the House and a PDP member, said procedures for nominating majority and minority leaders are clearly stated in the House rules.

“The rules clearly states that majority and minority leader will be chosen amongst members.”

“If the speaker made this announcement based on our house rules, then there is nothing wrong with that,” he said.

Another former lawmaker, Adeola Olasupo, condemned the action of the speaker, stating that principal offices are party positions.

“Honestly, it is strange,” he said.

He alleged that it could be a plot by the ruling party to weaken the opposition.
Source: Premium Times
Top Stories