It has been revealed that a powerful Kaduna politician is behind the souvenirs being circulated about Bola Tinubu's 2023 Presidential ambition. 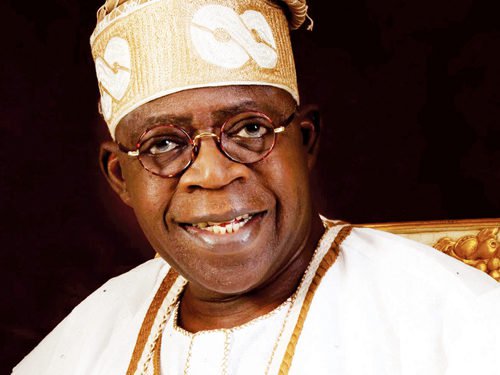 Bola Tinubu
The All Progressives Congress (APC) stalwart Asiwaju Bola Tinubu on Thursday disowned a “faceless group” pushing his alleged 2023 ambition.
According to TheNation, The group of “mischief makers” has packaged campaign souvenirs, such as T shirts, fez caps and leaflets to embarrass the former Lagos State governor. The items have been traced to Dubai, United Arab Emirates, The Nation learnt last night.
Sources confirmed that the materials were prepared and embossed with Tinubu’s name in Dubai to cause disaffection in the ruling party.
Although the souvenirs were credited to an unknown group christened “Asiwaju Reloaded Ambassadors”, the sources said they were bankrolled by a Kaduna politician.
Pictures of the souvenirs had surfaced on the social media on Tuesday and went viral.
But, the Tinubu Media Office distanced the APC stalwart from the souvenirs, describing them as the handiwork of mischief-makers.
According to the sources, the materials were sent out to create a schism between President Muhammadu Buhari and Asiwaju Tinubu, with a view to truncating whatever ambition the APC leader may have in 2023.
Tinubu has been a major ally and supporter of President Buhari in the task of building a better Nigeria.
Many APC leaders have dismissed the alleged campaign materials as a grand design to blackmail Tinubu and create friction within the APC family.
A top government official, who spoke on a condition of anonymity, asked rhetorically: “How can Tinubu, who has been working hand in hand with President Buhari to engender stability in the country, ensure stability of the National Assembly with the emergence of a united leadership and the revitalisation of the economy, be working at the same time on 2023 presidency when President Buhari has just been re-elected for a second term and the new government is yet to take off?
“Didn’t that stand logic on its head? Those who know the dynamics of politics know so well that Asiwaju Tinubu is too politically savvy to engage in such.”
Tinubu distanced himself from the souvenirs and their alleged sponsors.
His Media Office, in a terse two-paragraph statement signed by Tunde Rahman, said: “We have seen pictures of fez caps, T shirts, shirts and even leaflets with Bola Tinubu 2023 embossed on them purportedly by a faceless group which christened itself ‘Asiwaju Reloaded Ambassadors Nigeria’.
“Neither the group nor its souvenirs are known to Asiwaju Bola Tinubu.
“We hereby, through this medium, categorically deny any knowledge of the group and dissociate Asiwaju Tinubu from the group’s unsolicited and unwarranted materials.”
Top Stories