The group also warned that Gov. Bello should not set their paramount ruler, Atta Idakwo Ameh Oboni, against his own subjects. 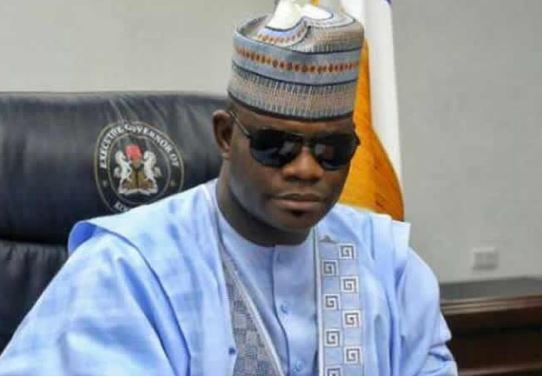 Kogi State Governor, Yahaya Bello
Ahead of the November 2019 Kogi State governorship election, an Igala socio-cultural organization, “Ukomu Igala”, Kaduna State chapter, have rejected the ambition of Kogi State Governor, Yahaya Bello, to serve a second term in office.
In a statement on Monday in Kaduna after the inaugural meeting of the group, Leader of the group, Mr. Samuel Salifu said the decision to reject Bello was a collective one.
The group also warned that Gov. Bello should not set their paramount ruler, Atta Idakwo Ameh Oboni, against his own subjects with a view to divide the people because of political interest.
Salifu said, “The Ukomu Igala therefore, rejects in its entirety, the present situation where the Governor of Kogi State would hoodwink our traditional rulers to go and endorsed him before the Nigerian president. We are equally grateful for the president’s response.
“How do you expect the Igala people to endorse a governor who styles himself as the white lion, who has refused to pay workers’ salaries for upwards of 28 months, who goes about boasting that the average Igala man’s wife can be purchased for as little as N6.000.00, or a governor who brutally and senselessly boasts that no Igala man can contest the governorship with him.
“A governor who cannot fix the streets of Lokoja – the state capital, who has no respect for the elders, and whose antics are known all over the country
“We won’t vote for someone whose ethnic roots complain daily about his highhandedness, whose only credential is the strange claim that he is the son of Mr. President!
“Therefore, “Ukomu lgala” does not endorse the aspiration oi the present governor for a second term even if he sends and monetizes 10,000.00 thugs.
The potential thugs should also be ready.
“The Attah and our other traditional rulers should rest assured that we are aware of what prompted them to go to Abuja and masquerade before Mr. President. Let the Agaba Idu be rest assured that he is our Attah – we cannot deny him.
“The governor or any governor for that matter can only remove him if the Igala people endorse such an action. After all what happened in Kano should be a lesson as the governor of Kano could not remove the Emir of Kano because his people refused. Secondly, the presidency’s plot to remove the governor of Benue flopped simply because his people were with him.
“The Igala people did not appoint our Attah for governor Bello to rubbish the collective will of the Igala people. The governor should please, leave our Attah for us and stop his pranks.
“A word should be enough for the self-styled white lion! Komu Igala will endorse anyone who identifies with the aspirations and values of our collective will and not necessarily some one who could not perform as he could not identify any practical projects to show to the world.
“Ukomu Igala is looking for a man or woman who respects, understands the collective value of Kogites, whose antecedents are known to Kogites, whose star is in the hearts of the young and old alike, the male and the female, the educated and the uneducated, tested, tried and trusted. A man whose father is in Kogi and who does not borrow a father from somewhere else!
“Ukomu Igala is looking for a man of integrity, stamina, who will stand for his base and Kogites.
“If people are going to aspire from Kogi East, such persons must appreciate our values, bear the burden of the entire state, be chosen by the collective majority will of our people. Such persons must be ready to pay salaries, plan for the future of our youths, respect our elders, build on any sound foundations and lay new healthy foundations, develop our roads, resuscitate our schools, bring health close to the people, patronize our farmers, be a friend to all and an enemy to only evil men.
“Such persons will be known, recognised and approved by Ukomu Igala. Our leadership organisation recognises the appointment of an Atta (father) of Igala by the kingmakers who have the blessings of the Igala community. The Attah is the Attah of Igala.
He is the Attah, who speaks the voice of the Igala people. His primary constituency is the Igala people. Atta also has some other traditional leaders representing all strata of Igala community. This is important for the attention of both our political leaders and traditional rulers,” Salifu said.
Top Stories