5 Killed As Container-laden Truck Falls On Tricycles In Onitsha


Vehicular movement on both sides of the road was halted as sympathisers and other relevant groups tried effortlessly to lift the container off the tricycles. 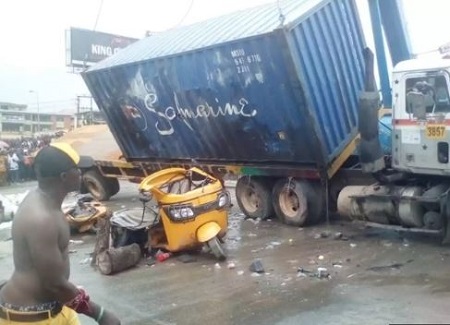 However, the Divisional Police Officer in charge of Okpoko Police Station, Mr. Ibrahim Jafiru, who personally got involved in rescue operations, said only two persons died.

He said a man and a woman died in the incident, while four people that were in terrible conditions, were rescued and taken to various hospitals.

However, some people at the scene said more than five people died in the incident.

Vehicular movement on both sides of the Onitsha-Owerri Road was halted as sympathisers, towing vehicles and other vehicles belonging to the Police, FRSC, WWF, ASTA and other relevant groups tried effortlessly to lift the container off the tricycles.

Help finally came from Julius Berger Construction Company, which brought their machine at about 1p.m., which lifted the container from the tricycles in a few minutes.

However, an eyewitness, Uchenna Madu, blamed the death on the impassable nature of both sides of Onitsha-Owerri Road, saying “the road and other road in the South-East are begging for attention because of neglect for the past five years.”
Top Stories