How I Saw Hell In China - Nigerian Footballer, Ideye Recounts


Nigerian footballer, Brown Ideye has talked about his life and career in a new, revealing interview. 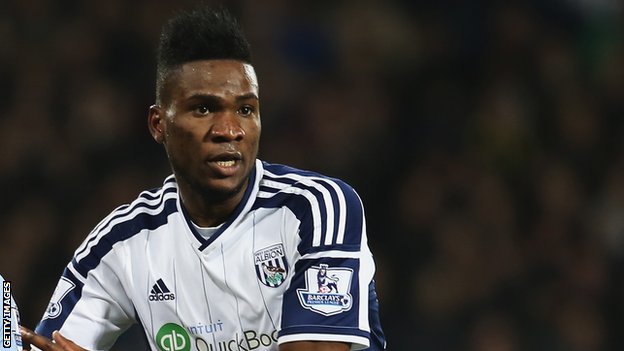 Ideye
AFCON 2013 winner Brown Ideye recently joined Greek side ArisSaloniki. The 31-year-old striker tells JOHNNY EDWARD about his spell in China, an unlikely return to the Super Eagles and more in this interview

You’re back to football after 12 months out. How does it feel getting back to play football again?

It feels very amazing. No footballer loves staying out of football that long even because of injury. Being back in action once again is really good. For me, this is what I have been dreaming of and Aris Saloniki gave me that opportunity to continue my career. I just love playing football and I missed the game all through the time I was on the sidelines.

How frustrating was it staying out of the game for one year?

It wasn’t easy but I had to keep my body in good shape and stay strong mentally. It was not what I wanted, the club (Tianjin TEDA) chose that path and I had to respect the tough call they made. I was ordered to train with the youth team despite not going against any laid down rules. I don’t pray for any footballer to go through all that I experienced this past one year in China. Thank God I’m back in the game and psychologically I have put that behind me. I need to pick up well from where I stopped and focus on my new club and hopefully do better.

Why were you banished to the reserve team at Tianjin TEDA?

That’s a part of my football life I want to include in my autobiography. It’s a story I want to tell about myself and children.
Did you at any point feel like giving up?

Not at all. I never gave up because I knew my career was not going to end like that. I was so certain that I will be back again. I’ve always been positive since that terrible decision was made by Tianjin TEDA and what kept me going on was the fact that I was innocent. It wasn’t easy but thankfully, I was among the right people.

You have played two Europa League games so far, the first for 90 minutes and the second for 86 minutes. Your account indicates no goals but one assist through a penalty. Do you think you are getting back to your best form?

I won’t say that yet. I stayed away for a year, so I’m still trying to put myself back on track again, get the same rhythm again. I believe with more training and total focus, I will get there. Aris are through to the next round of the Europa League, the target is to get into the group stage of the competition. The goals will come no doubt and I’m not worried about that. I have always scored goals in every team I played for and Aris won’t be any different. All I just need to do is to push myself harder. I’ve played in Greece before and they know me well. I’m not under pressure to impress as the club personnel know me very well. The team’s success comes first as far as I’m concerned.

After spells with Neuchatel, Sochaux, Dynamo Kiev and Olympiakos, you had a difficult time at West Brom and now Tianjin TEDA. What’s the new deal in Greece with Aris like?

I got a call from the President of Aris through an agent and during our discussion, we tabled what we both wanted and afterwards he said he was going to speak with the coach. He got back to me surprisingly, saying that the coach will love to have me in his team despite being out for 12 months; and he wanted me early enough for pre-season. Personally, I watched the team play last season, and from what I saw, Aris are a team that I will fit in well. They don’t have big name players but they make up for that with their team play and togetherness. In terms of financial packages, it’s not what I expected but it’s a great opportunity to start   my career again.

What would you like to achieve this season with Aris?

The objective of Aris this year is to have a great season. A top-four finish will be fantastic. The season has just begun and Aris are through to the next round of the Europa League. The fans know me well from my days at Olympiakos. I signed a one-year deal and so they should expect goals.

You are a striker, in terms of goal-scoring, which has been your best club and which was your worst?

I think Olympiakos was the best in terms of goals return and West Brom was the worst. I never had enough chance to prove myself there (West Brom) before I left, which still hurts in a way.

You last played for the Super Eagles against Zambia in 2017, in a World Cup qualifier in Ndola. Are you thinking of a return to the team?

To be honest with you, I’m not thinking of that at the moment. The Super Eagles is the last thing on my mind now. I have been out for long and now I want to focus on my club career. I’ve come to realise I’m unlikely to ever play for my country again.  I think I’m more than capable of doing a good job for my country but the fact is that I have been out for 12 months and the best thing is to focus more on getting back to my very best and my club career. It is quite unfortunate from my point of view, but it’s quite plain to see I’m not in the selectors’ plans. Still, I would love to be involved. Representing my country was always the ultimate honour, but it’s just not going to happen any time soon.
***
Source: The PUNCH
Top Stories