Some drivers have been caught on camera grabbing cash that was flying through the air on the highway. 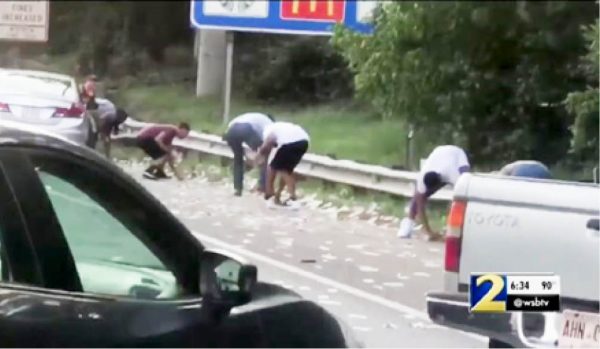 The drivers
Video  has captured more than a dozen people getting out of their vehicles on Tuesday to grab money that was flying all over a Georgia interstate, police said.

Dunwoody police responded to Interstate 285 around 8 p.m. Tuesday after about $175,000 (about N62 million) was reported to be “flying all over the road,” said Sgt. Robert Parsons, public information officer.

The 911 callers reported that more than 15 vehicles had stopped on the interstate in Dunwoody, some 17 miles from Atlanta, and people were “frantically taking the money,” according to a post on the Dunwoody Police Department’s Facebook page.

The post said when officers arrived, they spotted an armored truck on the right shoulder of the interstate.
“The armored car crew said the side door came open while they were driving and money spilled out onto 285,” police said.

Parsons told Fox News that the crew was not sure exactly how much money spilled out of the truck, but reported it to be about $175,000.

“The company has yet to confirm the exact amount,” Parsons added.

“While we certainly understand the temptation, it’s still theft and the money should be returned,” police said in the Facebook post on Tuesday.

“We are thankful there were no crashes or pedestrians struck as a result of this isolated cash storm.”

On Wednesday, Dunwoody police wrote on the department’s Facebook page that some people have been bringing back the scattered bills.

The post included a picture of a man returning cash and said, “So, believe it or not, some people have been returning the money that fell from the armored car on I-285.”

“We understand it was a bizarre occurrence, but do the right thing and return the money,” police wrote in the post.
***Fox News
Top Stories