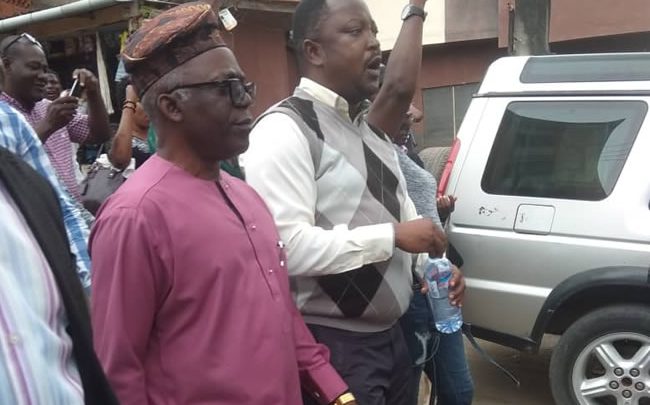 Falana confronts police at #RevolutionNow venue
Popular Human Rights Lawyer, Femi Falana (SAN) yesterday confronted the police for blocking the venue of #RevolutionNow event.
Falana was billed to speak on Insecurity alongside Professor Wole Soyinka at the event.
Falana wasted no time in confronting the Police officers blocking their access to the venue.
The symposium, tagged, ‘Democracy, State Repression and the State of Insecurity in Nigeria,’ had been scheduled to hold at 46, Ibijoke Street, Oluyole bus-stop, Oregun, Lagos.
The symposium was organised by the Coalition for Revolution, CORE. The organisers said it was scheduled to be, “A working consultative assembly of activists and organisations against the draconian development and the detention of scores of activists in the DSS detention cells.”
It has hashtags, #FreeSoworeNow and #RevolutionNow.
See video below:

#RevolutionNow protesters are on the street again! After periods of standstill, the exercise came back to live @ Oregun, Lagos with the arrival of renowned rights activist & lawyer, Femi Falana. The protesters then confronted th securitymen & engaged in a face to face dialogue. pic.twitter.com/NpiNAcMTwI