Following the inauguration of ministers yesterday, workers at the Ministry of transportation went into wild jubilation following the retention of Amaechi to head the ministry. 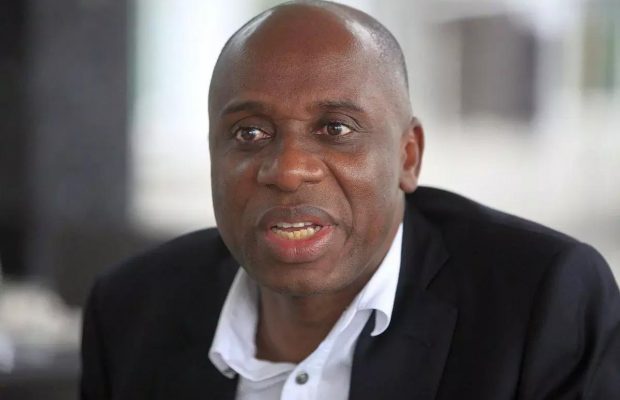 Rotimi Amaechi
Mr Rotimi Amaechi, Minister of Transportation, on Wednesday returned to his familiar turf with happy workers of the ministry celebrating his return to a ministry he  headed from 2015 to May this year.
The News Agency of Nigeria (NAN), reports that the minister, along with the Minister of State (Transportation), Ms Gbemi Saraki, arrived the ministry at about 1.30 pm, and  was received by jubilant workers who expressed joy at his return.
NAN also reports that family and friends joined the staff of the ministry to welcome the minister, who told the crowd that he would officially resume duty on Aug.  26.
“Thank you for the warm welcome; I will officially resume duty on Aug 26, address the staff and probably brief the media afterwards.
“I can see that some of you are doing well and I can see smiling faces, but I want to ask you all to go back to work and I will resume on Monday, for my official duty,” he said.
NAN reports that Amaechi was among the ministers believed to have performed creditably during President Muhammadu Buhari’s first tenure that ended May 29, 2019.
The former Rivers governor is credited with reviving the Nigerian  Railway line, especially after ensuring the inauguration of the Abuja-Kaduna rail line and for executing the Lagos-Ibadan rail project which is almost completed.
Some of the staff, who spoke with NAN, said that they were happy that Amaechi had returned to continue the good work he had started in the ministry.
They expressed readiness to work with him, while describing him as as a brother, mentor and leader that carries everyone along.
(NAN)
Top Stories