Munmuni also said drug abuse is a serious problem, adding that it breeds terrorism within communities. 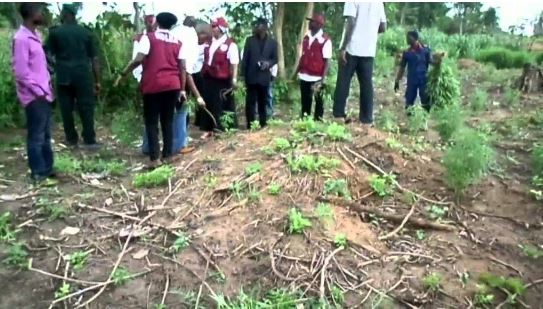 File Photo
A Principal Staff Officer Demand Reduction of the Plateau State Command of the National Drug Law Enforcement Agency (NDLEA), Bello Munmuni has raised alarm that some communities in the State now cultivate cannabis (India hemp), adding that it is the reason behind the rising cases of drug abuse in the state.
He also said drug abuse is a serious problem, adding that it breeds terrorism within communities, attributing it to all the crisis being witnessed within the State.
Munmuni disclosed this in an interview with DAILY POST in Jos, the state capital.
He said, “As a matter of fact, as a personnel of NDLEA, I can say it categorically clear that the profession of drug abuse is on the high side on the Plateau.
“It so happen within the Plateau, initially we know ‘marijuana’ cannabis (Indian hemp) is being transported from other parts of the nation to Plateau State; unfortunately with the discovery of cannabis plantation in Shendam LGA of the State, now it has spread to about eleven LGAs in the State.
“So Plateau State is planting and cultivating ‘Indian Hemp’, so its on the increase.
“What we are seeing in the society/communities is prescriptive drugs.
“As a matter of fact tramol, codine, refnol, exxol 5, diasopharm and others; these are prescriptive drugs, which are use to cure some ailments, but are being abused, so they are suppose to be under control, but with the proliferation of pharmacies and patent medicine stores, it’s very difficult for NDLEA to stem the tide allover, so that is why I said communities must participate,” he maintained.
“Because these people, that is the peddlers and those abusing the drugs belong to a community, and the members of those communities knows the bad eggs within their communities, so they have to come together and take concerted action.”
The NDLEA official however said even though the establishment of the agency is part of government’s efforts to stem drug abuse and peddling, they can do more by sponsoring jingles to sensitise the citizenry about the dangers of drug abuse/peddling.
“Government can use traditional rulers to ensure drug peddlers are send out of their various communities, if they refuse arrest them, and when arrested we want them to transfer them to NDLEA with the illicit drug they were arrested with, and let one or two of them give us statement as witness that’s all we want.
“If you arrest someone and you bring him to our office without exhibit/evidence, there is nothing we can do with him, we will just release him.”
According to him, “Drug abuse/peddling is a serious problem, it breeds terrorism; all the crisis your witnessing within Plateau State, is cause by drugs.
“Because you cannot see a reasonable human being decide to take peoples life at will, unless he is acting under the influence of drugs or some substance.”
Top Stories