Magu pledged the readiness of the commission to sustain the ongoing collaboration with relevant agencies, with a view to curbing the menace of cyber crimes. 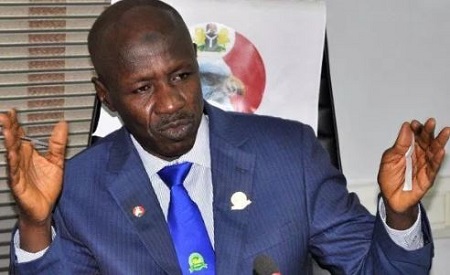 Acting Chairman of the EFCC, Ibrahim Magu
The  Economic and Financial Crimes Commission  says it has begun a joint operation with  the United State Federal Bureau of Investigation to clamp  down on internet fraudsters.

A total of 16 cyber crime suspects (Yahoo Boys) have been arrested in Abuja since the joint operation codenamed Operation Wire Wire was launched.

Acting Chairman of the EFCC, Ibrahim Magu, said  this on Friday while hosting the Chairman, Nigerians in the Diaspora Commission, Abike Dabiri-Erewa, in his office in Abuja.

He vowed to identify and bring the suspects to justice, adding that following the onslaught and intensified raids on their hideouts by the EFCC,  the internet fraudsters had relocated to Ghana.

Magu said, “It is very sad. It’s like the era of these 419ners and Yahoo  Boys is coming back.

“I remember we worked with the FBI in Lagos and others. We carried out  Operation Wire Wire. We are re-energising; we will go out and storm all their hideouts. Most of them have relocated to Ghana because the heat is on them.”

He pledged the readiness of the commission to sustain the ongoing collaboration with relevant agencies, with a view to curbing the menace of cyber crimes.

Dabiri-Erewa expressed concern over the arrest of 77 Nigerians in the United States in connection with alleged cyber crimes.

Meanwhile, NIDCOM has urged the Nigerians among the 80 persons indicted by the United States for massive email fraud and money laundering to turn themselves in voluntarily or be extradited.

Dabiri-Erewa  said, “We acknowledge the fact that an accusation does not mean guilt, and we hope that all the accused will be given fair and speedy trial.

“We also ask those accused in Nigeria to voluntarily turn themselves in to American authorities to clear their names, without which the Nigerian government would extradite them if relevant international treaties between the two governments are invoked.”
Top Stories