So Heartbreaking: Chilhood Sweethearts Killed In Auto Accident Only Minutes After Getting Married


The groom was driving a Chevrolet when he collided with a Ford pick-up truck which was towing a trailer carrying a tractor at 3pm on Friday. 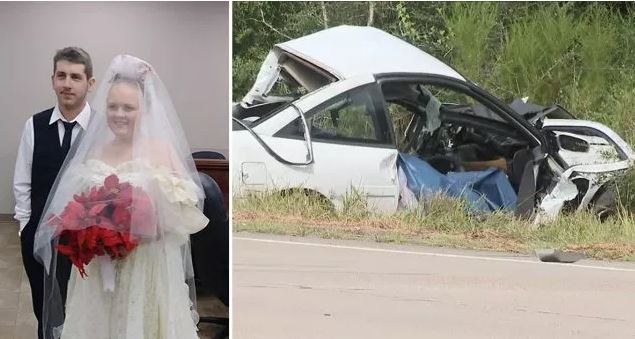 Harley Joe Morgan and Rhiannon Boudreaux Morgan, and the accident
A bride and groom have been killed in a car crash just minutes after getting married.
Harley Joe Morgan, 19, and Rhiannon Boudreaux Morgan, 20, were driving out of the Texas courtroom where they had just said their vows, when they collided with a pick-up truck.
The groom was driving a Chevrolet when he collided with a Ford pick-up truck which was towing a trailer carrying a tractor at 3pm on Friday, according to KFDM.
The childhood sweethearts, from the Orange County city of Vidor, were pronounced dead at the scene of the crash. However, the male driver of the pick-up truck was not injured, said police.
Harley’s mum Lashawna Morgan and sister Christina Fontenot witnessed the horrific scene as they drove behind the newlyweds as they pulled out onto the road.
Lashawna described how she tried to pull the couple from the wreckage as she ‘watched my baby die’ in front of her. She said she had witnessed her ‘own worst nightmare’ and the image will ‘haunt me for the rest of my life’.
The heartbroken mother added that her son and Rhiannon had been in love ever since they met at the age of 13. Lashawna told KDFM: ‘They had just gotten married. They haven’t even been married for five minutes.
‘Those two babies. The only thing that they wanted was to get married and start their life. The two of them had so many dreams.’
She added that they were planning a bigger ceremony with all their friends and family on December 20 so they could enjoy a Christmas wedding. Justice of the Peace Joy Dubose-Simonton, who conducted the couple’s wedding later went to the crash scene to pronounce the couple dead, said KFDM.
Top Stories