Tacha is not only in unhealthy terms with the housemates, the main official of the show, Biggie seems to have issues with her. 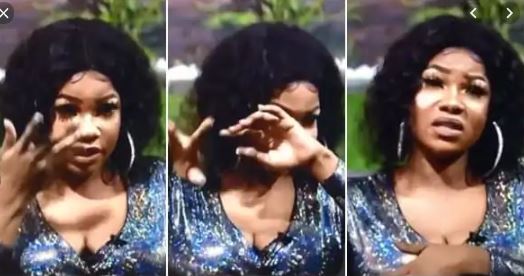 Tacha
Barely two weeks after getting addressed on the many infringements in the House as well as receiving Strikes and warnings as a result of their inability to follow Biggie’s House rules, the Housemates get issued Strikes again.
Tacha Gets Another Strike
In Big Brother’s House, when you are called and you do not respond immediately, this is disrespect. Also, when called and instead of responding immediately, you whisper a sly comment, this is also disrespect.
As a consequence of her disregard and insolence towards authority, Big Brother issued Tacha her second Strike in the game. In simple terms, Big Brother found her guilty of disrespect as well as undermining the world of Big Brother.
For her continuous disrespect and rudeness to the Authority, like when asked ‘why’ and thinking it was witty to describe the letter ‘Y’, Tacha was issued her second Strike.
One more Strike and her dream of making it to Day ninety-nine will be cut short.
Mercy’s Act Of Provocation Gets Her A First Strike
Two weeks ago, Mercy was issued a warning for damaging Big Brother’s property and as a result, got the long talk on why being Biggie’s guests involves them being of their best behaviour.
It may seem as if she forgot that breaking the rules will lead to punishment which may be Strikes or straight disqualification from the Big Brother House.
For going against the rule book which clearly states that provocation and violence are not permitted in the House, Mercy was given a Strike – her first Strike in the game.
Last night, Mercy tried to physically harm Ike during their lovers’ fight and for this, she broke Biggie’s rules.
Two more Strikes and she’ll be automatically disqualified from the Big Brother House.
Top Stories