Former Vice-President Atiku Abubakar says the Buhari administration is desperate to accuse ex-President Olusegun Obasanjo of a crime so as to silence him. 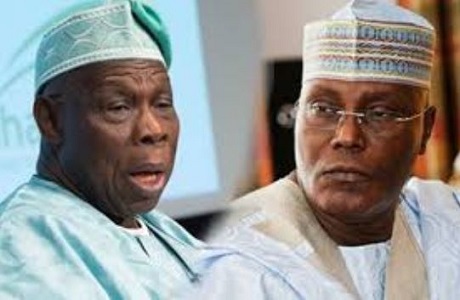 The presidential candidate of the Peoples Democratic Party (PDP) in the February 23, 2019 election, Alhaji Atiku Abubakar, has accused the Economic and Financial Crimes Commission (EFCC) of desperation to rope former President Olusegun Obasanjo into crime.

He said the anti-corruption agency wants to implicate Obasanjo in the N50 million donation to Olusegun Obasanjo Presidential Library by Mallam Babalele Abdullahi.

Abdullahi, Atiku’s son-in-law, was recently arraigned in court by EFCC and was accused of donating N50 million to Obasanjo Library.

Atiku, in a statement yesterday by his media office, said the arraignment was an orchestrated plan to rope the former president into a crime and silence him since the All Progressives Congress (APC) sees him as critical voice against the misrule foisted on Nigerians by President Muhammadu Buhari-led Federal Government.

“For the avoidance of doubt, Mallam Babalele Abdullahi did not donate any money in cash to the Olusegun Obasanjo Library.

“Yes, he did facilitate a donation of N50 million to the Olusegun Obasanjo Presidential Library, but so did many other individuals, including civic-minded traditional rulers, state governors, bankers and captains of industry.

“This is because the Olusegun Obasanjo Presidential Library is a non-governmental organisation that plays a pivotal role in promoting peace and stability in Nigeria and that should be applauded.

“Donations to institutions set up to promote peace in Nigeria and Africa are to be commended, not criminalised.

“Presidential libraries in America and other parts of the world are similarly funded by donations from civic-minded individuals,” Atiku defended.

The former vice president added that Abdullahi’s donation was made through a bank transfer, in full compliance with the law, adding that he did not donate or make any payment in cash, “as the EFCC is erroneously and salaciously misleading the public.”

Atiku argued that the sources of these funds were “completely legitimate and have been conclusively proven to EFCC.

“It is instructive to note that even EFCC has not once claimed these funds to be the proceeds of any illegal activity whatsoever.”

According to the former vice president, the desperation of the anti-corruption agency to rope Obasanjo into crime by all means was the reasons why it allegedly told the Federal Inland Revenue Service (FIRS) to include his name in a published list of tax evaders, along with the names of other PDP sympathisers, including popular musician, David Adeleke (Davido), because of the role he played in PDP’s gubernatorial campaign in Osun State.

Atiku called on Nigerians to be watchful for false and misleading stories planted in the media by EFCC against himself, former President Obasanjo and other persons deemed to be opponents of Buhari’s government.

He regretted that EFCC, which Obasanjo created to be an investigative body, is now being used to witch-hunt political opponents by the ruling party.
Top Stories