The really sad story has been told of a woman who married as a virgin only to lose her husband on their wedding day. 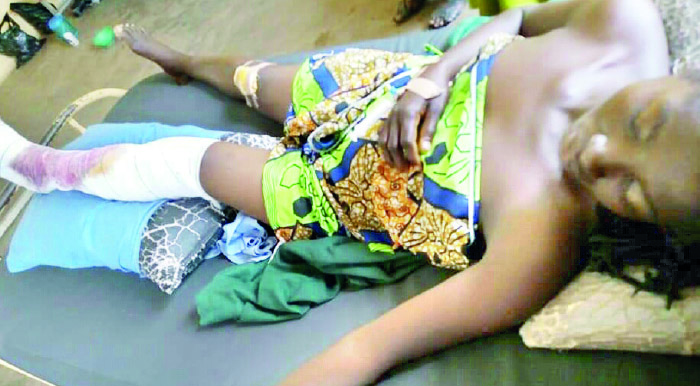 Agatha Agbah
It is the kind of story you need to be forewarned about its sad ending. Even when forewarned, you still need to muster your inner strength not to go lachrymose when you hear the end of this tragic story that changed a woman’s life forever. Though it happened 10 years ago, the barb of the loss is still sharp, the pain inflicted on her soul still fresh, and her psyche far from mending. Death is inevitable, some might argue, and there is Karma, others might philosophize, but the way it played out in the life of Agatha Agbah made it seem as if fate had a grudge against her.

Here is her tragedy in sum: in New Nyanyan, Karu Local Government Area of Nasarawa State, she lost her husband, Sunday Philip Daju, on their wedding days, few hours after they tied the knot. There is a cruel irony to this personal calamity: during the six years that they dated, they kept remained chaste and looked forward to their wedding night when they would consummate their love. They were at the point of doing that when death came calling. Ten years later, at 40 years old, Agatha is still a virgin, though out of choice as she was determined to keep the promise she made to her husband never to ‘know’ any other man in her lifetime.

She recounts the soul-searing experience to Saturday Sun correspondent at a private hospital in Lafia where she was recuperating after surviving a ghastly accident along the Abuja/Makurdi road. Agatha, a fish trader, was heading to Awe Local Government Area of the state to buy fish and sell in Abuja and when she was involved in an accident that claimed two lives. She survived with multiple injuries. The accident happened on August 22, 2019, exactly 10 years after she lost her husband, hence the catharsis that resulted in her reliving the painful memories.

She had met her late husband in 2003 at the University of Abuja when they were both given admission to study Business administration. According to her, even though she felt attracted to him, it took several months before any relationship grew between them.

“I met my husband on my first day at university. He was the first male friend I had; we started dating when I was in my first year. We courted for over six years. All the while, he never had sex with me because I told him I was a virgin and truly I was a virgin.

“We both agreed not to do anything physically intimate until after our wedding. Though we were tempted several times, we held on still.”

Her recollection includes trying times of the relationship before their short-lived marriage.

“We kept on growing in the relationship and became the best of friends in the university and during our service years in Adamawa State, I was never left out in making any decisions concerning his lifestyle. We had our tough moments, very challenging movements that would make us break up on Saturday only to reconcile on Sunday.

“Sometimes he’d be like “I’m not doing again” and I’d tell him to “feel free and go, even me, I am also tired”; but one day later, we’d run back into each other’s arms. It was not always rosy; we had fights, deep intense fights, but we were quick to make amends. We chose to look on the brighter side of the relationship. We, first of all, built a friendship; the friendship was built on openness and communication. We talked about everything and anything, no matter how small. He had grown into everything I could ever want in a man. With him, I had a friendship that I couldn’t have asked for more.”

The decision to get married was taken by the couple in August 2009.

“I didn’t have any doubt about spending the rest of my life with him,” she said. “He made me complete. I was excited and very happy.”

At this point, she was overwhelmed by her emotion. For a brief moment, she was hysterical, resorting to a long monologue in which she reminded herself that were her husband to be alive, he’d be beside her in the hospital, and would be her refuge when she lost her mother five years ago. She also talked about how she lost her father 11 years ago, the year before the wedding day tragedy of losing her husband.

Pledge and death on wedding day

A few minutes later, she mustered enough courage to continue.

“On our wedding day, I made a promise to him that morning, that no other man will ever get to sleep with me, no matter what happens.It’s been 10 years now since he died and I am still holding on to that promise. I will forever hold on to it,” she affirms.

In a heartbreaking voice, she chronicles how her husband died:

“That day, Saturday, August 22, 2009, was the best day of my life, where I got to marry the best, most bluntly honest, funniest, kindest and most loving guy I have ever met. We had a perfect day, surrounded by family, friends, love and laughter. We couldn’t have asked for a better day.”

However, the joy never lasted the day, as she put it poetically, “the magic ran out at the end of the ceremony.”

Continuing, she says: “We finished reception at about 6:30 pm, and we retired to the bedroom, we both pulled off our wedding dresses. I’d removed my gown when he went to the bathroom to take his bath and that was it.”

She blurts: “He slipped in the bathroom, collapsed and died.”

She adds: “After about two minutes, I didn’t hear any sound from the bathroom. I called, “honey, are you there?” There was no response. So I went after him. The moment I saw him, I realized something was wrong. I screamed and ran out of the room calling for help; friends and family relatives came to my aid and he was found dead in the bathroom.”

Medically, his death was attributed to acute heart failure, aggravated by the excitement and rigour of the event.

This theory, however, was debunked by Agatha, who insists that in the seven years they were together “he had no health challenges, he was fit and healthy and regularly do exercise.”

The sad part of the story

She came to the most harrowing part of the story: “The morning of our wedding, he told me that he dreamt of a wedding day death, that was a shortly before the scheduled wedding ceremony. We found such far-fetched idea to be rather amusing and we just laughed the matter off. We never had the opportunity to talk again about it.”

For her, “the saddest part” was that “he didn’t even get to disvirgin me. I was counting some hours or minutes to get disvirgined by him after the wedding.”

She reiterates: “I have decided never to get married or sleep with any man for the rest of my life, that is the only respect I will want to leave for him.”