Following attacks on foreigners in South Africa, Zambians have reportedly attacked businesses owned by South Africans in their country. 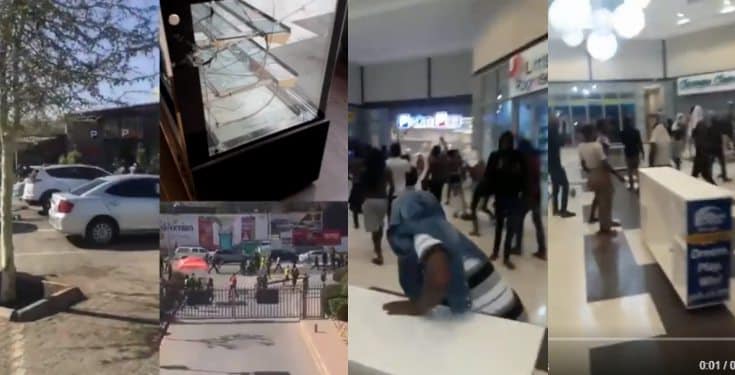 South African businesses attacked in Zambia
Videos have surfaced on social media showing the moment a South African business outlet, Pick n Pay in the East Park Shopping Mall in Lusaka, Zambia, was attacked by protesters on Wednesday morning.
The protest at the mall located at Thabo Mbeki Road in Lusaka which also houses Builders Warehouse and Food Lovers Market, both South African companies led to its closure.
It was also learnt that some University of Zambia students engaged in the protest in which they broke through a barricaded door of the Pick n Pay outlet, armed with shopping trolleys.
The protests which rocked Nigeria and Zambia over the xenophobic attacks launched by South Africans against foreigners especially Nigerians, has also led to the closure of Multichoice offices and branches in Nigeria and Zambia.
MTN has also closed some stores and service centres in Nigeria, while Shoprite confirmed that several stores in South Africa, Nigeria and Zambia were unable to open due to protest action.
Zambian-born singer, B’Flow disclosed that a Zambian radio station Hot FM will no longer play South African music. He averred that South Africans are teaching other African countries to be hostile and also expressed fear that the violence which South Africans instigated might spread to other African countries.
See videos below:

Zambia students have taken to the streets boycotting and looting SA businesses. The mess we have created in this country has a dire ripple effect. Can our politicians get off their mansions and do something now pic.twitter.com/awG4msEyEO

Peaceful protests all over Lusaka this morning. Almost every South African business has been halted. Sad how South Africa is teaching other African nations to be hostile. What we are seeing in Lusaka has the potential to spread to the rest of Africa. #StopXenophobia

When will South AFRICANS learn the meaning of AFRICANS? The inhumane treatment and continued attacks on Africans by Africans must come to an end. Who has bewitched you that you should harbor so much resentment towards your own kind? Quit feeling like you are more special than...

Lusaka Zambia. Protests over the violence in SA. Video as received pic.twitter.com/x4OZ1v3oxT